Half day Tbilisi city tour is a sightseeing tour of the highlights of Tbilisi. Explore the Old Town. The architecture in the city’s historic district is a mixture of Georgian, Byzantine, Oriental and Neo-Classical European styles. Tbilisi is so compact that you can easily explore the nearby Synagogue, Armenian Church and Mosque, in addition to the Georgian Orthodox churches so fundamental to Georgian culture. Peaceful co-existence of the various religions helps emphasize Georgian tolerance.

Mtskheta day trip offers you to escape the city and visit old capital of Georgia within just few hours. During the tour, you can enjoy panoramic aerial views of mountains around Jvari Monastery, observe the confluence of Aragvi and Mtkvari rivers, or have a time trip back to early centuries in the area of Svetitskhoveli cathedral and Samtavro church.

The one-day tour in Kakheti is a fascinating journey into the eastern part of Georgia, during which you can enjoy the mountain views, picturesque villages, ancient temples, and observe the life Kakhetians.

Abundance of grape varieties with Georgia can compete only in France.

The culture of wine as well as wine drinking in Georgia goes to the far-distant past, as the land goes deep into the root of the Georgian vine.

One-day tour to Kazbegi with the itinerary from the capital city Tbilisi to the snow-capped peak of the Mount Kazbek will open up an enchanting Georgia. Visit the scenic town of Stepantsiminda, where life ticks by at a relaxing pace. Take in top local attractions such as the 14th-century century Gergeti Trinity Church on the Chkheri River, and enjoy breathtaking views over the mighty Darial Gorge.

On the way to Kazbegi you will visit:

After arrival in the village of Stepantsminda, hike to the church of Gergeti Trinity, with a wonderful view of the mountain.

Important information:  Gergeti Trinity Church is a popular waypoint for trekkers in the area, and can be reached by a steep 2-3 hour climb up the mountain, or around 30 minutes (6 km from the central square in the village Stephantsminda) by jeep up a rough mountain trail.

Transfer to the airport

Price per person in the group: 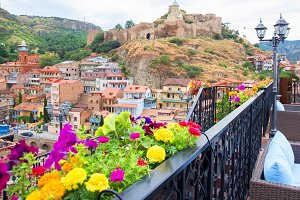