Day 1 Arrival- Gala dinner
Day 2 Tbilisi Mtskheta tour
On this tour you will have a great opportunity to get acquainted with the two capitals of Georgia: ancient and modern, Mtskheta and Tbilisi. From the old to the new. You will get acquainted with the most picturesque and beautiful places. Mtskheta is one of the oldest cities of Georgia. The architecture of Jvari monastery and Svetitskhoveli, inscribed on UNESCO’s list as the most ancient and respectful attractions worldwide. However, Tbilisi is not inferior to historical monuments of Mtskheta. You will see and learn about the history of the fortress of Metekhi, which destroyed and rebuilt many times, churches Sioni and Anchiskhati, sulfur baths, etc. You will visit: In Tbilisi:

Day 3 Kazbegi Tour
One-day tour to Kazbegi with the itinerary from the capital city Tbilisi to the snow-capped peak of the Mount Kazbek will open up an enchanting Georgia. Visit the scenic town of Stepantsiminda, where life ticks by at a relaxing pace. Take in top local attractions such as the 14th-century century Gergeti Trinity Church on the Chkheri River, and enjoy breathtaking views over the mighty Darial Gorge. On the way to Kazbegi you will visit:

After arrival in the village of Stepantsminda, hike to the church of Gergeti Trinity, with a wonderful view of the mountain. Important information:  Gergeti Trinity Church is a popular waypoint for trekkers in the area, and can be reached by a steep 2-3 hour climb up the mountain, or around 30 minutes (6 km from the central square in the village Stephantsminda) by jeep up a rough mountain trail.

Day 4-5 Free day / Optional tours
Unforgettable day in Kakheti Kakheti – wine region in Georgia. Indescribable beautiful road that runs through Gombori pass. The one-day tour in Kakheti is a fascinating journey into the eastern part of Georgia, during which you can enjoy the mountain views, picturesque villages, ancient temples, and observe the life Kakhetians. Abundance of grape varieties with Georgia can compete only in France. And then, if we compare the number of varieties not grapes, and cheese: in Georgia grows more than 400 varieties of grapes in France, more than 400 varieties of cheese The culture of wine as well as wine drinking in Georgia goes to the far-distant past, as the land goes deep into the root of the Georgian vine.

Accoring to Unesco, Uplistsikhe Cave Town-Fortress is situated on a rocky massif in 15 km eastwards to town Gori on the left bank of the river Mtkvari. The fortress is mentioned in chronicles from earliest times. Its history begins in the I-II millennium B.C. Uplistsikhe was an important religious, political and cultural centre in the Hellenistic and the late Antique periods (IV c. B.C. – IV c. A.D.).

The aggregate space of the museum complex is 3 529,7 sq.m. In the reserve stockes of the museum about 40 000 article exhibits, documents, canvases and auxilliary materials are kept now. There is a scientific library in the museum.

Transfer to the airport

Price per person in the group: 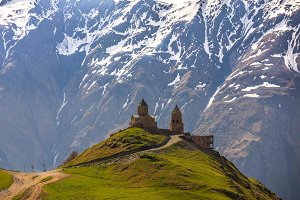