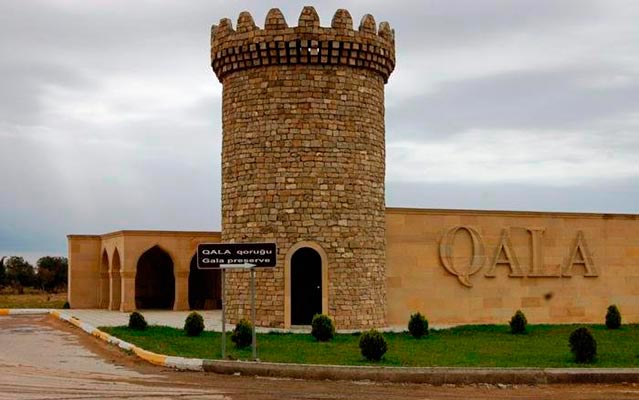 « Gala » is a well-known historical and ethnographic museum-reserve in Azerbaijan. It truly fascinates with its beauty, besides it is located in the open air. There is a museum 40 km from Baku. Tour operators of Azerbaijan advise you to go here with a professional guide, so you can learn more interesting things.

This is a modern building – it was founded 7 years ago – in 2008. However, it has already become one of the main « business cards » of the Republic. And the very location of the museum is unique – on the site of the reserve. Here the entire history of the development of the Absheron peninsula is collected, to which everyone can touch, and find out what the ancestors of modern Azerbaijanis lived. And therefore the visit is included in many tours around Azerbaijan. According to historians, the first settlements in the village of Gala appeared 5 millennia ago.

On the territory of the museum were restored vivid examples of architecture and examples of traditional architecture, which were collected from various places of Absheron peninsula. In the museum collection selected rare exhibits, as well as rock paintings of primitive peoples, which are depicted in the moments of catching animals and sacrificial rites.

Bypassing the possession of the museum is not so simple. Its territory extends to 1.2 hectares of land. Do not get lost in the « historical past » will help an experienced guide, who should be hired in the museum itself, since it is he who can most deeply and reliably acquaint himself with all the secrets of the Absheron peninsula. A tour here will help you organize and in the hotel of Azerbaijan, where you stayed.

As soon as the foot of the tourist steps into the area of ​​the « Gala » museum, he immediately finds himself in the unknown world of 16-19 centuries. Special impressions can be obtained by examining ancient houses: tents made of animal skins, dwellings made of stone and clay. Another unique opportunity, opening before the travelers, is to visit the pottery and bakery, go to the medieval market. And historical monuments of architecture can not only admire, but also take pictures. But, perhaps, special impressions will be added by the opportunity to bake bread in an ancient oven, weave an oriental carpet or give a treat from your hands, for example, to a camel. Perhaps, you will not find such a museum on vacation in Uzbekistan.

No less entertaining museum exhibits are located at exhibitions. Since they have a cultural and historical significance, they are protected by glass, but this does not interfere with medieval dishes, ornaments and household items.