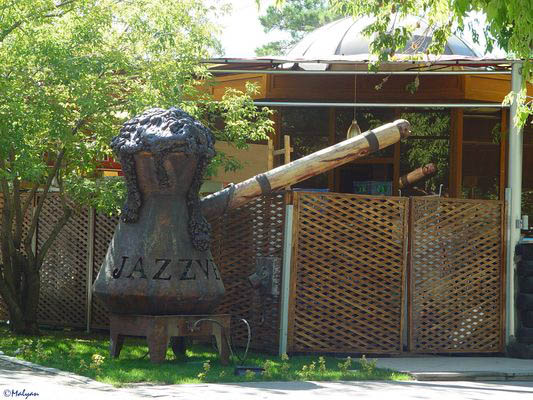 What happens if you mix a refined cocktail of jazz and coffee? We had an excellent network of schools, spread throughout Yerevan, with the ringing and buzzing a bit called «Jazzve». It was with a similar sound foamed hot, fragrant and dark drink to the Turks, or as it is commonly called « jazz ». From the fusion of two words dzhazva and jazz and has appeared at the beginning of the two thousandth’s the name of the new company, which, after years, has reached such proportions that not only entertains strong coffee Yerevan, but also engaged in the supply of grains of different varieties, and also opens up the charming cafes abroad. There is no tour of Armenia does not pass without tasting coffee at Jazzve.

The first is the oldest institution appeared in the Armenian capital near the cinema « Nairi ». Since the establishment in just a few weeks has gained enormous popularity, and could no longer accommodate all those wishing to enjoy a coffee with the sweet sounds of jazz, it was decided to open several rooms in other parts of Yerevan. Whichever hotel you stayed in Armenia, close to this cafe.