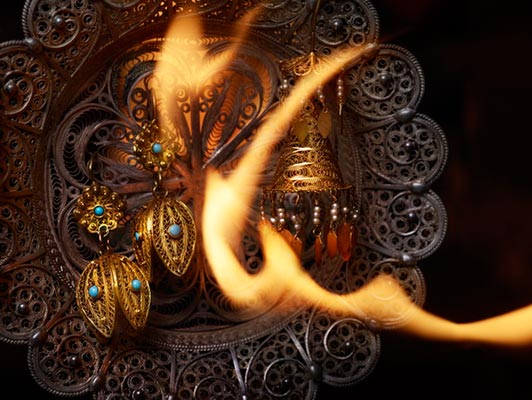 Until now, such unique musical forms as creations of ashugs and mughams have come down. Ashugs are amazing representatives of culture who knew how to combine music and poetry. They became famous first of all for their competitions, where the strength needed to be shown in the ability to combine notes and poetics, and the weapons became folk songs, dastans and “de jishme” – dialogue songs. Mugams were included in the early 21st century in the UNESCO list of cultural heritage and are known as the basis and forerunner of Azerbaijan’s musical art.

In the distant Middle Ages, palaces of rulers in the cities of Shemakha, Ganja and Tabriz became the mainstay of art and culture. Any self-respecting feudal lord strove to decorate his yard with a bright constellation of poets and musicians, philosophers and thinkers. Court poetry blossomed in different genres: rubai, qasid and gazelle. Evidence of this is the heroic epic “Kitabi Dede Korcud”, the largest known in medieval Azerbaijan. This is an invaluable source of information about the culture and traditions of Azerbaijan, where you can learn not only such private details as the names of musical instruments, but also see the whole vivid picture of the development of musical art in those days as a whole. Something similar can be seen only during the rest in Uzbekistan.

Azerbaijan is inscribed in the history of world culture with a clear rhythm of poems by such authors as Gatran Tabrizi (11th century), Nizami Ganjevi (12th century) and Fizuli (16th century). By Nizami in five poems he was able to reflect the diversity of form and unity of thought, linking them not only into one piece of “Hamsa”, but also strung, as beads on the thread, the basic and subordinating ideas. His art enraptured the minds of not only compatriots, but also many lyricists of other peoples of the medieval East. Fizuli entered his name in the history of Azerbaijan as the creator of the lyric-epic poem “Leili and Mejnun.”

The art of poetry in Azerbaijan is, above all, adherence to traditions. Here the delicate ligature of words and music was to delight not only the ears of the lords, but also to please ordinary people. Both of them were equally fascinated by the wandering storytellers-ashug singers, who, without knowing fatigue, moved from one settlement to another, to admire the old tales or the new poem of grateful listeners. To the sound of the strings, they slowly weaved the fabric of the epics, entertained them with light songs, enchanted by amazing stories and enchanted with poems. The appearance of ashugs, whether it is a large city, or a small mountain village, has always been an event, and simple peasants and families of local rulers flocked to their speeches. Azerbaijani poetry has a place for a heroic epic, where the protagonist, most often Koroglu, tirelessly fights for justice, inevitably plunging despots and striving for wise and reasonable government. This image is known among many peoples of the Middle East and Central Asia, but it was in Azerbaijan that he became so loved. There are also full of feelings, imbued with the beauty of love, romantic dastans, such as “Asli and Kerem” and “Ashig-Gharib.” The clear rhythm of poetic works with an openwork frame flashes every second of the life of this people. Here and labor songs, and ritual mysterious legends, moralizing tales, fervent lyatifa (anecdotes), wise proverbs and sayings, inquisitive puzzles. Each region of Azerbaijan is famous for its pearls of folklore poetry and prose, as well as traditions, customs and unique way of life.