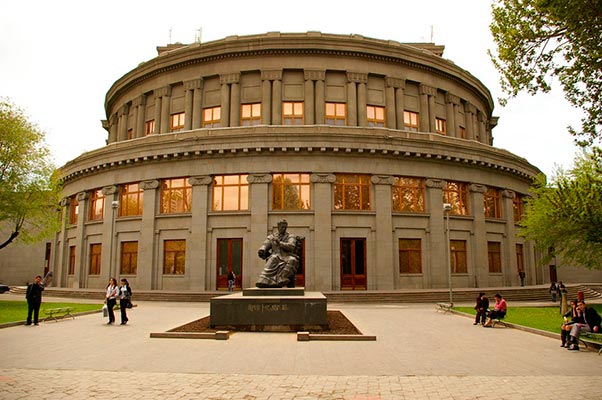 On the south side of the theater is decorated with one of the most beautiful areas of Armenia, Liberty Square, where the composition is crowned with a monument to two outstanding figures of culture, the poet Tumanyan and Spendiaryan composer, whose name as a result was named Academic Theatre. For the convenience of the spectators, who come here to enjoy the next concert or staging, under the area a few years ago was undeveloped underground parking, consisting of three floors, ready to take up to 500 cars. The other side of Liberty Square encompasses lush emerald scenes scenic park. It is here, where, under the canopy of trees hiding charming tables, like to come to drink coffee, or something stronger audience before the premiere of the play or the romantically minded youth. In the square is another local landmark – a small artificial lake, which was created in a form that follows the contours of Lake Sevan. This pond is also known as “Swan Lake.”