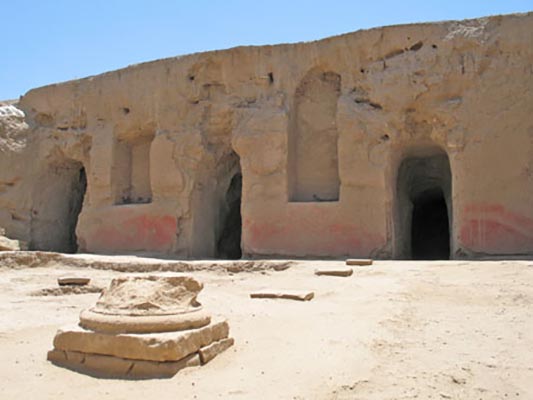 In the northern part of ancient Termez there is a particularly revered place of worship by the Buddhists, called Karatepa. It is located on three hills, including several historical and cultural monuments:

Fate gave this complex not only the rise, which came in the second and third centuries, but also the decline, which became evident in the 4-5 centuries AD already. At this time most of all sacred buildings ceased to be used. For example, the lion’s share of the caves became a place for burial, the entrances to which were covered securely using different bricks.

The invasion of the Arabs or high taxes?

Some representatives of the scientific community believe that some of the temples still continued to be used until the beginning of the 6th century as a Buddhist prayer houses. However, scientists have not been able to form a united view yet on the connection of the destruction of certain parts of the complex with the arrival of Arabs to this land.

Today, a lot of evidence has been collected, which state that Arabs tried in different ways to destroy the pagan (in their opinion) religion. For example, representatives of all other faiths were imposed excessively high taxes. Many theologians explain the relatively rapid decline in the activity of the Buddhists in the region with that fact. The faithful and priests who did not want to pay such a high price for the right to freely practice their rites, decided to move to Kashmir, where at that time ruled a dynasty who respected believers of that faith.

The adoption of a new religion

The era of Islam in Toharstan started in 8-9 centuries AD. People simply couldn’t physically pay taxes to the state for their desire to practice other religions and faiths. However, numerous reports suggest that followers of Sufism sometimes gathered in the caves exposed to destruction in the 10-11 centuries. This fact is confirmed by multiple of rock drawings and inscriptions discovered on the walls of the caves in different languages:

Holidaymakers, who want to visit the complex, must obtain a special permission from the National Committee for Culture and Tourism. This requirement is justified by the fact that the complex is located on the borderline territory.