The cave complex of Vardzia 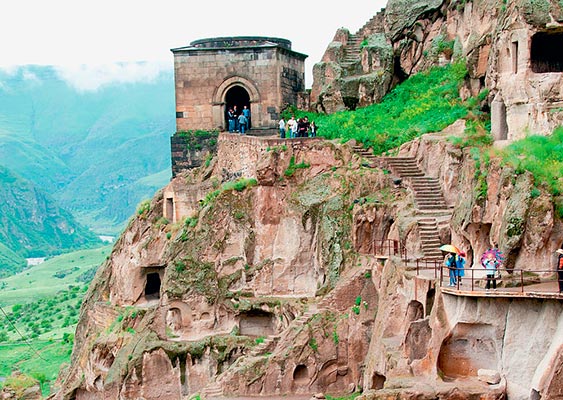 Fans of ancient caves can satisfy their craving for adventure, walk along Vardzia complex, located in the eponymous village area. The first mention of the cave complex occurs more than eight hundred years ago in the documentary sources.

Many centuries ago it housed fortification, monastery, the centerpiece of which was a temple. Archaeologists who have studied this complex, discovered many ancient frescoes and paintings. For example, among the works of art can be found to see the face of King George the Third and Queen Tamar.

The first major test of sufficient strength to this complex was the earthquake that occurred a hundred years after the discovery of the temple. As a result of disaster more than two thirds of the complex all have gone underground, and many of its parts, preserved on the surface, were significantly damaged. Today, archeologists were able to recover a large part of the complex. Today, tourists have the opportunity to see these witnesses of history, passing through hundreds of restored buildings, tunnels and catacombs.

Who here can come to visit, using the services of taxi, which leaves from the town of Akhaltsikhe. It is worth noting that the quality of the road surface is poor, so be prepared that you may lull. In the above-mentioned locality, you can get there by train from Tbilisi.

Interesting facts about the cave complex

Many tourists who have visited here, mark always a comfortable temperature inside the caves. Even on the hottest day there is naturally cool, poet, down here, do not forget to bring a mug of hot tea or coffee. In order to create comfortable conditions for tourists, the small information center was built in the immediate vicinity of the complex. Where you can rest, and get all the necessary information in Russian or English.

The tourist complex, a ticket which will be available to all categories of citizens, offers each tourist the opportunity to satisfy their curiosity. First, here you can see only the upper part of the complex. Secondly, wishing to further explore the mysteries of antiquity, can independently or with the help of an experienced guide to go down below.

Long or not walking on the cave complex can cause not only fatigue, but also hunger. That’s why there are all conditions for recreation. For example, tourists can dine at a local restaurant or take a dip in the numerous sulfur springs. Ten minutes of water treatments will help you to recover lost strength.

Here you can spend the night in a hotel or in a guest house on the outskirts of the village. The cost of living varies from fifteen to twenty-five lari per night. If you consider yourself to fans of the tourism, then you can spend the night in a tent. In summer, weather permitting these parts to relax in the open air. Tourists are accustomed to eating at the restaurant, there will be able to enjoy traditional Georgian cuisine. If you are familiar with one of the villagers, then, no doubt, be sure to invite you to dinner in a Georgian house.

Fans of souvenirs here will have to be content with a relatively small selection. Most of the tourists who visited the complex, just bring home colorful English-speaking guide. The second most popular item of expenditure aways fans are items purchased at a local temple.

The history of the construction of the cave complex

The first mention of the complex Vardzia belongs to the twelfth century, when the Georgian throne passed to Queen Tamara. It is from her name, many historians have attributed the dawn of national art and culture. In the wake of the era of cultural renaissance of Queen Tamara commands to build a monastery in the mountains. Such an unusual decision of its historians tend to explain the love for the queen in the mountains games. Legend has it that even the name of the future complex appeared as a result of one of the pranks of Queen Tamar.

It is believed that Tamara loved to play hide and seek with his uncle. On one of those days, they went to the place where the construction will unfold cave complex in the future. Tamara There are so well hidden that Uncle desperate to find her. After several hours of waiting a little Tamara jumped out of his hiding place, saying, “Ak-Var, Dzian!” Which translates as “I’m here, Uncle!”. It is believed that since this area, as well as the complex will have received this title.

Another factor that made ​​the Georgian authorities are actively build fortifications, became permanent Mongol raids. Permanent military conflicts forced to alter the original project to make it more defenses. That is why the current monastery looks more like a fortress than a classical church.

There is another point of view, explaining the alteration project. Many sincerely believe that the original Queen Tamara is planning to build a fort cave, and the temple was just a clever way to confuse the enemies of the state. This fortress was supposed to be a powerful stronghold for future extensions of the country.

As a result, the cave complex has turned out really roomy. Nearly twenty thousand people at a time could there be in full battle regalia. The existence of several secret passages, allows surprisingly to attack the enemy, allowed to reflect almost any attack. He himself was a huge complex of cave city, equipped with everything necessary for a fulfilling life:

Existing historical records say that everything in this complex was more than six hundred different buildings, which stretched the entire length of the mountain. All rooms are located on the thirteenth floor.

The fact that they could not make the invaders, did nature. Serious blow to the defense capability of the complex caused an earthquake. Then, already in the XVI century was crowned with success the Turks attack, destroy all the monks. They gathered all the monks inside the center of the church, and then set fire to it. As a result of such unfortunate events were forever lost many valuable frescoes. However, the fire that had completely destroyed the temple, helped him survive. A thick layer of soot could protect against the adverse effects of time, many examples of art.