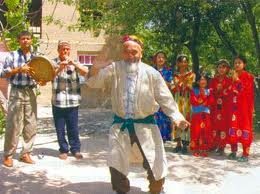 UNESCO declared Boysun, area located in Surkhandarya region in Uzbekistan, as one of the “Masterpieces of Oral and Intangible Heritage of Humanity”. This fact stimulated promotion of traditional heritage in Central Asia. Different areas became subject to development and preservation programs.

A lot of evidences were revealed that showed different arts. Traditional forms of ,poetry, music, entertainments, uzbekistan culture and crafts attracted attention of Uzbek and foreign scientists. Boysun was considered not only as a place where traditional arts were preserved, but also as a place that influenced today’s culture. Trade routes long time ago passed by Boysun. In addition, Boysun is distant from large modern cities. These two factors played the most significant role in preservation of original traditional culture. Due to its cultural originality, this place attracts a lot of researches who are restoring historical events.

During summer and autumn seasons in 2003 scientific expedition of Boysun together with foundation that promotes Boysun culture and Fine Arts Scientific Research Institute, conducted a research in Boysun. Researchers recorded audio and video materials in more than 40 villages, and took pictures. As a result, they collected valuable information that shows historical development of Boysun, its traditions, religion, architecture, entertainment and art. Using this material, in winter 2004 there was organized a conference to exhibit art objects and musical instruments.

Traditional music in Boysun is one of the most significant arts of Boysun. It preserved its originality from ancient times till our days. Researches, conducted to find out more about music in this region revealed so much interesting about the whole culture and folklore.

Music in Boysun started to develop long time ago. Different elements were borrowed from Tajik and Uzbek music. It reflected variety of psychological, economic, natural and social features. Family traditions can be heard in Boysun music. Music and lyrics represent different events, traditions, ceremonies and rituals. Rites were usually accompanied by special music.

Rites are important part of culture, because it consists of everything that people believe in, spirit of people and way of life. It is more than just a combination of music, games, dances and other activities. It has a deep meaning of keeping and respecting traditions, history, ancestors. Rites show us how generations interact, how principles change with different generations. As significant determinant of culture that can give a lot of information about history and culuture, rites of Boysun are studied carefully.

Rites that were practiced on the territory of Boysun area are different from other rites in Uzbekistan. The differences are in music, number of participants, activities and order of activities.

For thousands of years Uzbek population collected and selected principles of life, norms of conduct and wisdom of ancestors. All the knowledge people could gather is expressed in rites. Rites give us understanding of what was considered to be aesthetic. The process of rite creation is an artistic process. People created cultural values and decorated them with entertaining elements. A lot of rites look like theatrical performances with music, special dressing and make up, choreography. Through rites, we can learn traditional art.

There are rites in Boysun area that are performed for holidays and events that are acknowledged by modern people in Uzbekistan. They are: Boychechak, the holiday of the first furrow, New Year, gathering of tulips and Navruz, different types of wedding ceremonies, Guyanda and Sadr, birth or death ceremonies. Rites for different types of events have different music. The music can be simple or complicated, with or without lyrics.

Wedding ceremony rite is to sing, dance, play music, have different games and performances. Traditions of Nikokh tui (wedding ceremony) are preserved the best. Some traditional dances and songs are still performed during weddings of our days. They can be observed in Boysun, in particularly in Rabat, Tuda, Nazari villages, Ark usti and Kuktepa mahallas.

One of the most theatrical rites is the rite of circumcision. This even is accompanied with games, performances, donkey riding, wrestling, kurash and other traditional entertainments. In Yakkatol village, there is a rite when people are cooking water biscuits. Women bake biscuits in tandyrs and when biscuits are ready, men cleaned them from ash. After that biscuits are put in special place. There was also different food for rite participants and guests.

2 days prior to the main holiday, there is one more rite. This day people cook national food called pilau. Usually it is cooked in three big boilers. Some people go for firewood. When they return, children and guys meet them. One man should be wearing “kavzo”. Kavzo is a traditional piece of cloth. Then participants gather together and go to the celebration place dancing and singing to the national musical instrument at the same time. Donkeys carry firewood that was brought by men. When they reach their destination, they don’t stop dancing for some time. After that “kovzachi” receives presents and all guests go to for dinner. This rite is called “kavzo”. It is practiced in Dehibolo, Yakkatol and Alachapan villages.

Entertainment during circumcision is an important part of the rite. During that day guests see: goat fight called “kopkara” that takes place in Derbend village; kurash – national wrestling sport that is practiced in Duoba and Sangchil villages. Winners of kurash receive presents from people who host the holiday. The person who takes first place gets valuable gifts. Participant of these games come to the holiday from different regions and districts. Hosts take care of them and offer them accommodation.

“Yigi” and “Guyanda” songs performed during buirial and memorial ceremonies are (original laments) are widely practiced by Boysun people. Traditionally these are women solos, but occasionally it is performed by a group of singers. The nature of the song is relevant to this sad event. It expresses sorrow and drama. “Guyanda” is also known as “Alamli kushik” that translates as “song of sorrow”.

During performance of “Gudanya” song, people show different gestures that look like a form of dance that create necessary emotional mood. The singer Sharbon Shoimonova was born in 1927 and continues to perform today. The song begins after dead body is washed. At this time, friends and relatives gather to mourn and weep. Shoimonova plays a role of the main weeper. She starts singing and others should follow her. They keen, dance and move anticlockwise repeatedly saying “oblo khu”.

Only Uzbek-Katagans in Boysun area for burial day cook so called “kora osh”. From Uzbek it translates as “black meal”. To cook kora osh, it is important that bones of animals used for meat are not broken. At some burials, guests receive coins to throw on burial palanquin.

Ancient “rainmaking” rite still exists in Boysun in our days. People during this rite sing a song called “Sus Hotin”. Sus hotin translates as “a woman gives water”. This tradition is one of the Zoroastrian rites. People in some Boysun areas start performing this rite when the land is dry and they need rain. After the order is given to begin the rite, people take a special doll and go to every house in the village. While visiting houses, they sing “Sus Hotin” song. When hosts of a house hear people singing this song by their door, they open the door, pour the doll with some water and give participants food. At the end of the rite, people gather together and throw the doll into the river. At the same time they are saying good wishes. This is how Avlod village people perform this rite. In Kurganchi and Yakkatol, the process a little bit different. Women take a pumpkin that has a part of a musical instrument inside it. When they rotate the pumpkin, they get the sound similar to the rhythm of “Sus Hotin” song. At the end, people give each other presents and water the doll.

There is also a rite dedicated to the first furrow. It still exists in Alachalan, Yakkatol, Kofrun and Pulkhokim. For this rite people sign songs about first furrow and gathering of harvest. This tradition is still relevant, because farmers in this areas use wooden plough to plough up the land. For ramazan holiday they perform “E rabbiman” song and for rainmaking rite they sing “Mirkhaidar”.

Another interesting rite that is practiced in today’s Boysun is the rite for curing insane people. This rite takes place in Sariosie, Kulganchi, Avlod and Machai villages of Boysun. People perform “Jahr” song. Jahr translates as “cry or loud”. By crying, acting like a shaman and reading verses written by Ahmad Yassavi, people are trying to cure insanity of a person and convince a person that he or she is in the process of recovering.

The rite used for curing insanity clearly shows connection to shamanism and at the same time to Sufism. People perform actions that shamans do and simultaneously read religious verses. Another curing rite called “Alas” is used to cure ill children. People believe that certain words which are considered to be magic can make children healthy again. This rite is performed in Yakkatol, Avlodi, Sariosie, Machai and Kurgancha villages.

Shamanism is the oldest art that has religious links. Singing is based on few strains that are periodically changed. This form of religious art has question – answer structure that is expressed by altering intonation. The singing is done quite fast and this makes singing dynamic.

Rites have great variety of purposes. There are rites that are performed for family matters, to celebrate natural events, to express believe and many others. Rites were so common in Boysun, that they played significant role in development of different arts.