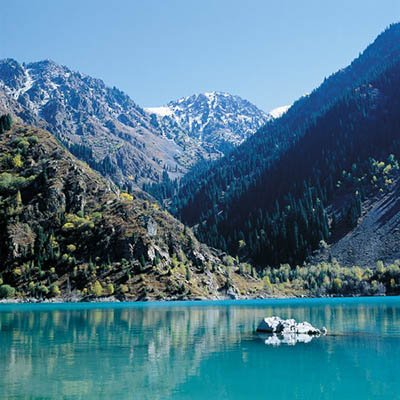 Despite this, Almaty is one of the greenest cities in Asia, not in vain the name he received thanks to cultivation of this magnificent land of “Almaty aport” one of the most juicy apple varieties. Lush emerald green wings gray frame house support. Parks and gardens are given to the order of 8 thousand hectares. In addition to the usual view of ordinary trees, here you can easily find and amazing unique varieties. The fact is that at different times here were brought samples of flora from distant North America, with the closer of the Caucasus and the Crimea, Siberia and the Far East. In the surrounding area you can find a rare local latitude hawthorn, anemones and even mysterious Juno. But plants here not only brought, but were taken by breeding new species. And these fruits duo ingenuity of the human mind and the life-giving forces of nature, are named after famous scientist whose names are now, alas, forgotten by many. It Nedzvetskogo apple, spruce Schrenk, Fetizova onion, saffron Korol’kova and many other unique plants. Names of famous Soviet leaders received many place names in Almaty and the surrounding area. However, this tradition has sunk into oblivion, and most of these names were replaced by Kazakh true definitions.