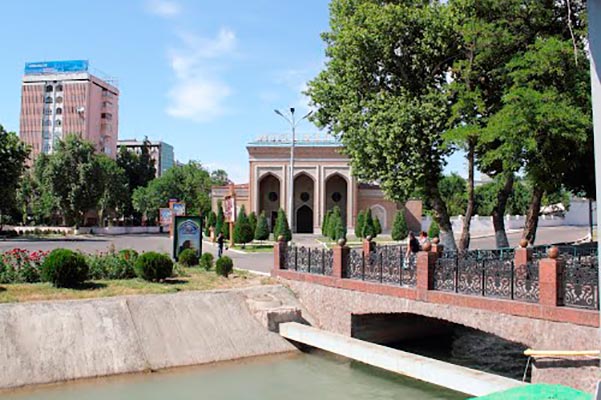 Musical Theatre named Muqimiy is located In the city of Tashkent, Street at Mahmudjon Gafurov Street, 187 (National Park) of Chilanzar district. You can get to it from the metro station Bunyodkor. The doors of the theater are always open to its visitors, except for Tuesdays.

The history of the museum dates back to the last century. The current musical theater started its creative career as a opera house, though musical dramas were also played here. The collected troupe staged performances of famous plays, day after day developing its own story. Having worked in this mode for ten years, the theater received a new name, the musical and drama theatre. Along with musicals, it staged performances of famous European playwrights, as well as a lot of attention was paid to the local well-known writers. However, it didn’t last very long. Later, there was a division into the State Academic Bolshoi Theatre and the theatre named after Muqimiy. Just four years later the latter received its own building, which got the present name.

Since the middle of last century, the theater repertoire plan was systematically supplemented by new productions, as well as changing little old ones for a new vision. Like in all other theaters, the period of perestroyka, during which freedom of thought and a more open appeal to the people went ahead, made a big impact on it as well. It was already possible to unfold in full force. Today the Muqimiy Theater plays a very important role in the formation of the historical memory of the city and makes its contribution to the development of the whole history of Uzbekistan. Call – (+998 71) 245-16-33.