Registration
Travel in Uzbekistan and Central Asia > Tombs of the Sahaba

Tombs of the Sahaba 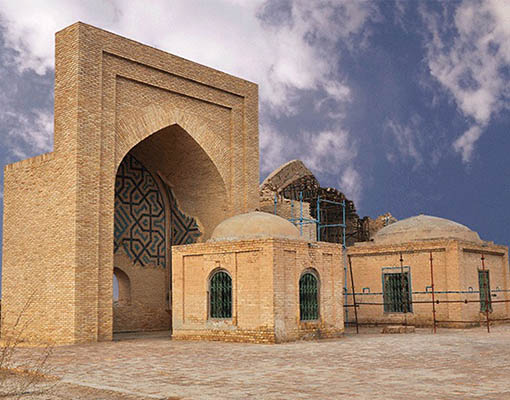 Not far from Abdullakhan Kala to see and venerate the tombs of the Prophet Muhammad’s companions – Sahab Ghifaari and Bureyde. These people will have heard of the prophet fiery speech urging the truth of the monotheistic religions. After the capture of the Merv oasis Arab wars, it began the elimination of all the local religions – Zoroastrianism, Buddhism and Christianity. The main goal of the Arabs was the introduction of Islam and its doctrine of the submission. The active preachers of Islam and became Ghifaari Bureyda. They all died in the end of the seventh century, and buried them here. Above the tombs were built small domed shrine to which pilgrims are constantly coming. In the XV century behind tombs built aivans. They are decorated with colorful tiled facade tiles, and inside of glazed bricks were lined ornaments of geometric shapes called girih. Similar eastern portals were built mausoleums for attracting attention and refer to the importance of people’s resting place here.

On the graves are slabs of black marble, they can be seen embossed decorations with floral motifs and inscriptions in Kufic language.

Many Muslims want to visit the resting place of Muhammad’s contemporaries. To travelers could rest a little, here we built a simple little place to sleep and symbolic summer kitchen. In addition, nearby there was a covered container with drinking water.

The current view of the Sahaba Tombs emerged after the reconstruction, since the end of the XIX century aivans badly damaged.