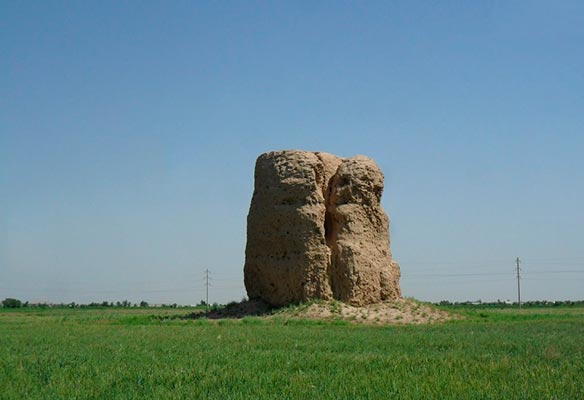 ot far from the remains of ancient Termez there is an almost twelve-meter Stupa (the word “stupa” means “heap of stones”), which belonged to the followers of Buddhism. It is located in the south-eastern part of the historic complex. It is believed that it was built around the first or second century AD. That was the period of maximum flourishing of Buddhism in these areas.

Numerous historical and cultural expeditions conducted here by domestic and foreign scientists have revealed numerous monuments, each of which overlaps the local fields where crops are grown. As a result of time and harsh environments, many of these monuments and the Stupa itself began to crumble. In just a few decades the Stupa has turned into a regular mound, made of clay losing all its shape. Experts in the field of architecture say that in the shapeless architectural construction it would be very difficult to recognize a Buddhist religious structure.

Despite all this, the stupa was an important element in the life of Buddhists. Among all the stupas discovered by scientists in the region of Southeast Asia, this one was especially revered by believers. It is noted that the traditional structures of “umbrella of Honor” found its application in Chinese culture. There it became known already as pagoda type of construction. Also, it was actively used in Korea and Japan.

Today we can confidently say that the original stupa was placed on a special pedestal, which was decorated with slabs of white stone. In its upper part it was resettled with a roundabout. Historical evidence suggests that the overall diameter of the structure was about fourteen and a half meters. The main part of the stupa consisted of mud-brick and its dome was made of the “umbrella of Honor”, which was thoroughly fixed on the shaft. With its dome and pedestal the height of the stupa reached sixteen meters.

The upper part of the stupa was used by believers to store sacred books and texts, and relics of the Buddha. The outer walls of the sacred chamber were painted in bright red color. It is believed that this stupa was really the first monument of Buddhist architecture that was discovered in the Central Asian region in the first third of the twentieth century. Its historical and cultural authenticity was established in 1927, when the representatives of the international research group led A.Strelkov conducted excavations here.

During all the scientific expeditions to this region more than forty different places of worship were discovered. Almost twenty of them were found in the territory of modern Uzbekistan.