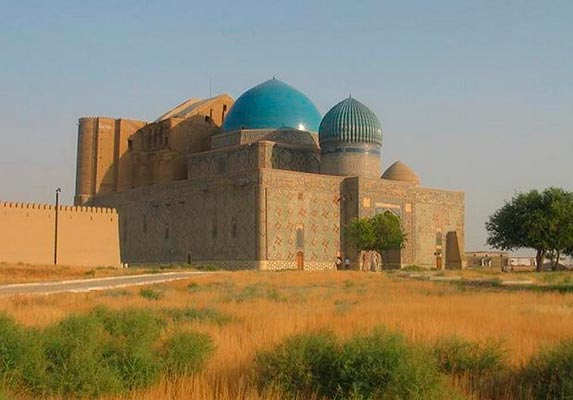 The well-known memorial complex dedicated to the Holy Sheikh Hovandi Tahur, who lived in the fourteenth century, consists of three different in their functional load buildings:

1. The great tomb of Kaldirgoch-biy, dating to the 15th century;

The fact of existence of special places for veneration and prayer ceremonies, as well as the presence of a grave combines the tombs. The central element of the two tombs is the dome, created in the form of a hemisphere. The study of various literary sources of the time revealed that the revolt against Jungar invaders was led by well-known at the time Tolebi, who was the head of Tashkent.

The hero, who was afraid of nothing

A popular rumor has brought to our days that only one news of the approach of Jaungarian invaders caused wild animal fear in the eyes of the locals. People in a hurry tried to get away as far as possible from their homes, just to save their lives. The only person who did not succumb to the general panic became Tolebi.

When the Dzhungarians captured the city, Tolebi was brought to the court. The Chief Justice asked Tolebi if he really didn’t feel fear before the new government. Tolebi replied that he was not afraid of the invaders. He no intention of leaving his home or destroying a little nest of swallows, located near his tent. These bold words so touched the hearts of Dzungarians, that they not only saved his life, but also did not touch his yurt and swallows’ nests. The invaders spared all the relatives of Tolebi too.

To survive in order to defeat the invaders

Since that time, hero Tolebi went down in history under the name Kaldirgoch-Bii, which means “master of the swallows.” His example was an excellent incentive for people to rise up against the invaders-Zhungars. After the invaders were driven out of the city, Tolebi became Deputy Mayor of Tashkent. After his death, the townspeople gave him great honor and buried him next to the saint of Sheikh Hovandi Tahur.

More recently, using financial support of the Muslim diaspora in Kazakhstan, a mosque was built. The diaspora representatives regularly visit the grave of the revered Kaldirgoch-biy. On the territory of the mosque one can also find a tomb, erected in honor of one of the leaders in Tashkent – Yunuskhan from Mogolistan.