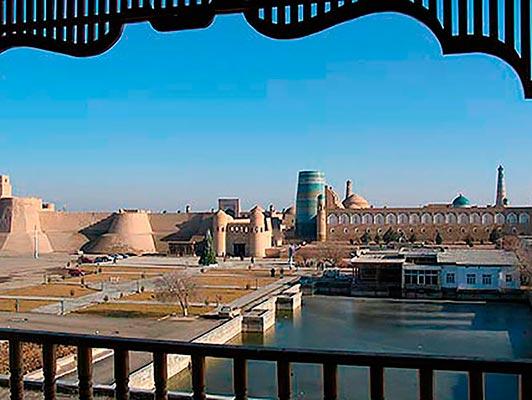 Cemetery of Pahlavan-Mahmud considers as the cultic center of Ichan-Qala. It was formed about the grave of Khiva’s protector Pahlavan-Mahmud (1247-1326). By profession of a poet and philosopher, also he was successful skinner and wrestler. He was esteemed as a protector, a wrestler and poet as well as healer through Khiva, India and Iran. In accordance with tradition he was buried in his own workshop. The necropolis had generated about his place of bury in the 14th-17th centuries. After construction of madrassah built by Shirgazi-khan at the beginning of the 18th century, he orientated into the grave of Pahlavan-Mahmud.

The first mausoleum of Pahlavan-Mahmud was constructed in 1810 by initiation of Muhammad-Rahim-khan I. The mausoleum that operates nowadays was built some time later. It had comprised the old grave and khanaka including a high doubled dome that’s silhouette was a symbol of Khiva. Before the entrance, there was set a memorial courtyard. The portals of the first necropolis became an entrance gates to Pahlavan-Mahmud cemetery. In the early 20th century by the order of Asfendir-khan, there were built double storied Korikhona in court yard’s western part and summer aivan mosque in the eastern part. Majolica facing owns a lot of cartouches with religious saying, verses by Pahlavan-Mahmud and names of masters.