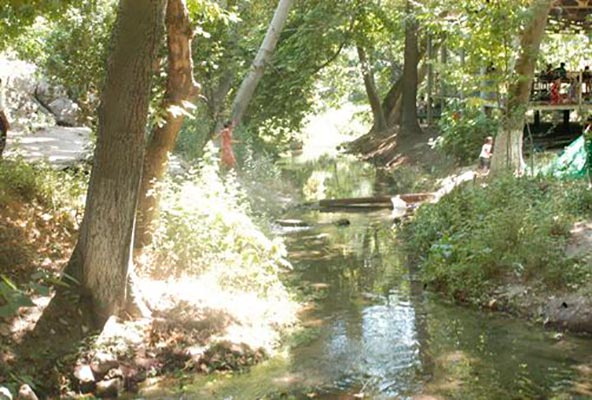 In the vicinity of the south-eastern edge of the settlement Kirk-Kiz, which is located in Almalyk district of Tashkent province, there is an architectural monument sacred to the locals. Numerous folk tales say that complex got this name through the intervention of higher powers. On the day, when local girls went to bathe, nomads attacked the settlement. The girls knew that the fate awaiting them was not the best, and therefore asked higher powers to turn them into fish. Since then, this area became known as the Kirk-Kiz.

Today this lake has long become one of the most popular holiday destinations of parents with children. Local authorities have allocated necessary funding to bring the whole territory in order. For example, here there are places for recreation, active sports games, cooking and so on.

History of the Complex

The historic Complex of Kirk-kyz bulak, formerly known as Kulata, is located in close proximity to the picturesque lake. The scientists managed to establish that this ancient settlement was a major center of craftsmanship. Every year various natural resources were mined and actively processed here.

Today we can confidently say that this historical complex consisted of several parts, each of which had its own functional load:

A detailed study of the settlement helped make certain parallels between it and the ancient city of Tukket, which also specialized in the field of metallurgy. Numerous Arab written sources have helped scientists learn about the interiors of the settlement. Various authors especially emphasize cleanliness, luxury and security in this settlement.

Continuous research work related to the study of the area, helped to define the formation of first ​​settlements in the area related to the reign of Kaunchi I. It is believed that the first signs of urban development here began to emerge from the first to the fourth centuries AD. As a rule, the inhabitants chose a place to start building houses exclusively along the river. This fact is explained by many researchers as the desire of local residents to simplify their conditions of irrigation.

The first peak in the development of this settlement dates back to the second quarter of the first century AD. The city began to expand in the direction of the south-western borders. Active urbanization led to the need of improvement of the water system. In those early years, it was decided to build several artificial lakes to provide local residents with water in the required quantities

The middle of the first century AD was marked with the intensification of metallurgical production in the fort and the various workshops that were located in the northeastern city gates. Over time, the city’s economy was increasingly relied on these sectors, which indicates that the necessary resource base, that provided manufacturers was present here. For example, in the vicinity of the settlement there were numerous mines.

In the tenth and eleventh centuries, active changes in the architectural appearance of the fortress began:

The study of the ruins of the smelting industry leads to the conclusion that the sources of the ore mines were several:

Presumably, a large number of mines that were used by local manufacturers were a direct consequence of the economic situation in the region. In those years, the area of ​​forests was gradually reduced, and with it, petty steel production was constantly moved to big cities. Consequently, they constantly needed to expand the resource base in the vicinity, in order to reduce transportation costs.

The territory of the settlement that gave scientists a lot of archaeological artifacts, such as “Kulata treasures”, in the thirteenth century was experiencing not the best period. As a result of economic, social and military upheavals the settlement fell into neglect. Only in the central part of it it was possible to find signs of active development right up to the sixteenth century.

The first mention of the ancient town of Kulata can be found in written records of 1928. In the period from 1929 to 1934, it was visited by many archaeological expeditions. As a result of active study of these places it was possible to make a detailed layout of all buildings and surrounding areas. For example, historians have been able to find in this ancient settlement the remains of metallurgical production. Despite this active work of archaeologists no restoration has been done here yet. Today the settlement of Kulata is in disrepair.