Holy places near Samarkand the Cave of Hazrat Daud 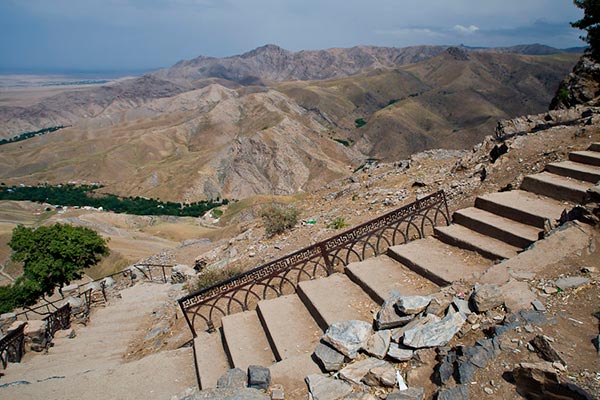 In the southwestern part of the country, located near Samarkand, in the place Aksay there is a cave of St. David (Hazrat Dawood). The tomb, wrapped in many legends and tales, is an important place for the world’s religions. It is believed that if you genuinely turn your righteous prayers to the saint, they will certainly come true. That is why each year it attracts a lot of tourists and pilgrims from around the world.

There are several legends

One of the Muslim legends tells that David went to Asia to spread the word of a true faith, but the Zaroastrians didn’t quite like it. People living here found Hazrat Dawood as an intruder, who was to be eliminated. Deciding to escape from the wrath of the infidels, the preacher turned in prayer to the Almighty, who helped him, by putting apart stones in the cave where Hazrat escaped.

The second legend, even more dramatic, says that David had to be sure to find a special secret place to relax before an important battle with Goliath. It is believed that the mythical creatures moved David to the area of ​​Samarkand, but the evil forces brought here his opponent too. Not yet fully prepared for such a difficult battle, David turned to God for help. He ran for a long time in the desert, before on his way did not appear a mighty rock. David sincerely believing that God wold not leave him, began to dig into the rock a groove. To his surprise, the rock became smoother than butter, and he managed to get inside. Goliath was left with nothing.

It is necessary to observe a special ritual

A lot of evidence exists today, confirming the powerful force that lives in this cave. In order to make your wish come true, you must strictly comply with the following conditions:

A constant flow of tourists and people, who have decided to visit the holy places for themselves, let the locals to set up at this complex a good business. It is worth noting that not everyone, albeit a committed traveler, can cover two thousand steps. That is why today tourists have the opportunity to rent today cloven-hoofed animals to climb. There the guests have the opportunity to buy on the way upward numerous souvenirs, herbs and so on.