Museum of the history of Temurs 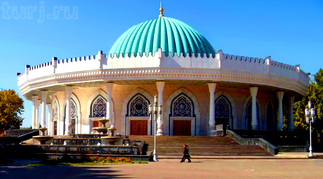 The state museum the history of Temurs has been opened in Tashkent on October, 18th, 1996. The museum is erected in the centre of Tashkent to Amir Temur’s 660 anniversary. This unusual construction under the form with a dome in style of known architectural monuments. Since first days of the existence the museum became the centre of scientific thought and educational work.