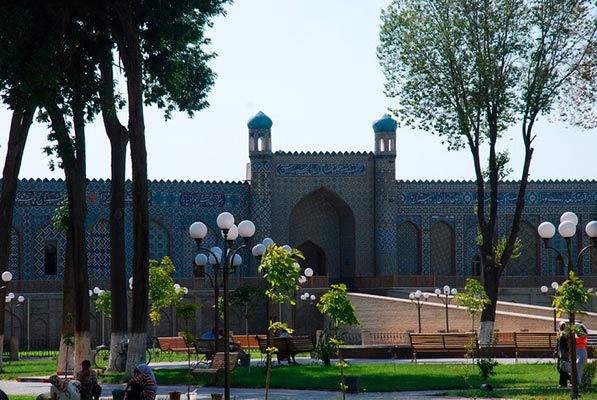 Kokand Regional History Museum is the history of the great city, located in the Fergana Valley. Today Kokand is a large industrial center, in the distant past, the former capital of the powerful Khanate. Before the building passed into the use of the museum, it has gone through several stages, greatly influencing the city’s history. Initially, being one of the most influential cities in the Khanate era, it was captured by the army of the Russian Empire and invaders settled in this very building, which was the personal palace of the Khan. The next time the palace came under consideration when within its walls Agricultural Exhibition was opened It was only years later, when the building was handed over to the museum workers who tried to revive this historically important object, that had witnessed many events that influenced the development of the history of Kokand.

At the entrance to the museum visitors are greeted with two guns of the period of occupation by the Russian Empire, left by soldiers there. The palace is divided into six rooms, each of which is a separate department. Inside, visitors can see a unique Kokand architecture, minarets, elaborately painted with patterns, carved doors and patterned ceiling interlacement.

Moving from room another, you can see the exhibits, vividly telling about the history of this beautiful region. In the department of primitive art everyday objects, smithereens, stone tools are collected. The next section presents gifts of foreign rulers, and in the other – clothes, tools, utensils, books used by Kokand townspeople in last century. The next two rooms are quite unique, which are directly linked with historical events .The first one is a revived Khan’s room, in which the palace furniture is placed and the second room is filled with stuffed animals, some of which it will be difficult to see in our time. More than 30 thousand exhibits tell about the richness of the Kokand region, and their number is increasing with time by the findings of employees. In addition, the museum has a constantly working exhibition, which both ordinary citizens and guests of the city like to visit.