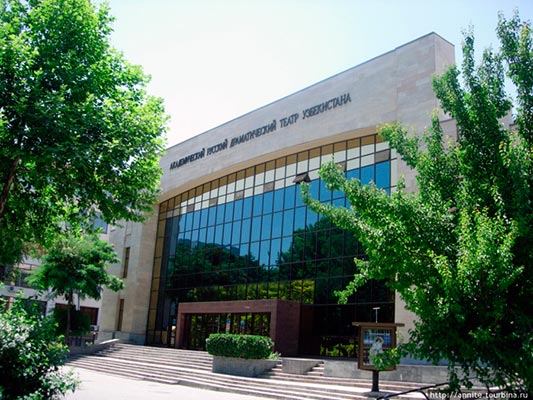 The founders of the theater were Vasiliy Chirkin and Michael Vulkonskyl, who managed to gather around them well-known and talented artists. The troupe put mainly works of contemporary playwrights, which included such works as “Boris Godunov,” “Peter I» and others, proudly wearing the title of the gold fund. The plays based on works of famous local writers, reflecting the problems and achievements of native Uzbek Land were also staged.

Some thirty years later the head of the theater was replaced, Vladimir Shapiro becoming a new director. During his time the theater got a new life, by bringing up a strong group of actors. No play was held by incomplete hall. On the contrary, there was always a full house. At the end of the last century V. Gvozdkov became a new theater director. Talented and motivated, he began to create quite a varied repertoire, introducing new products and changing the old trends towards more sophisticated. The period of perestroika also affected this, when the old order sunk into oblivion, and theater staff got new opportunities for self-improvement.

On the stage there appeared many plays that had stood far in the shade. They began to raise such topics, to which both ordinary spectators and theater critics were not indifferent. The theater was replenished with new actors who made their contribution to the overall order part of his vision. The theatre was greatly enriched by young theater artists who before that had been trained in the school-studio. They started putting on not only the works of famous authors, but also creative works of new writers.

Drama Theatre of Uzbekistan cordially opens its doors every day, inviting new spectators to performances taking place in the evening at 18.30 on weekdays, and at 17.00 at weekends.