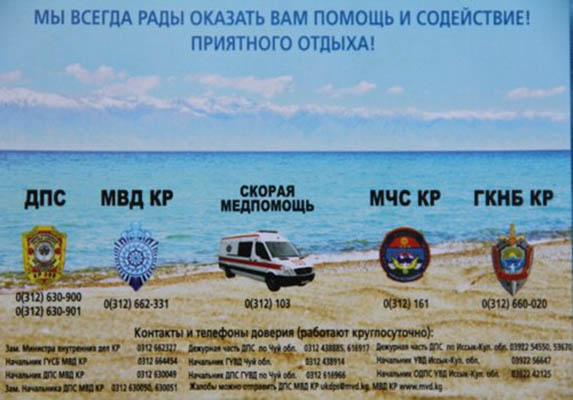 First, you should avoid night walks at unfamiliar or descent places. Even a big city of your homeland, you would not risk going in an independent journey through abandoned wastelands, so it is worth here watch over their safety. Second, avoid companies that abuse alcoholic beverages and no attach too often towards bottle. Official statistics suggest most of all property crimes occur while intoxicated.

Third, make sure your belongings are at safe place. Never walk around city with all documents featuring wallet, which does not close on cash surplus. Mind that actually on completely calm day there seems high probability loosing purse or documents. Don’t lazy use hotel safe services.

Traveling Kirgizstan, remember this is Muslim country.  Never open commit defiant acts may offend believers’ feelings. Even more careful tourist need be when he plans going to remote republic areas, where having excessive waywardness can run into larger troubles.

If travelers want make currency exchange, they can handle through formally licensed institution. Most favorable change rate will become offered capital subject exchange 50 or 100 dollars. When traveler needs withdraw money from card, such operation may appear performed only in Osh and Bishkek cities. There are simply no ATMs within remaining settlements. Would you like pay by credit card? Take into account; this could appear done only within several capital stores. If tourists became thirsty boldly drink tap water. As a rule, tap water comes from deep sources.