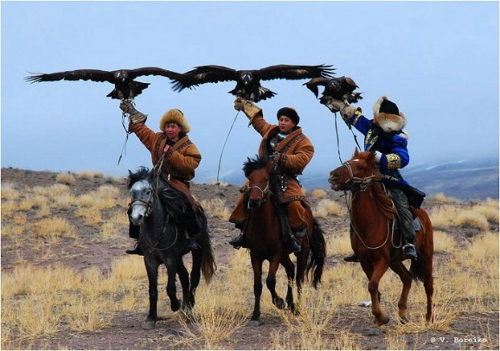 Horsemanship Kyrgyz feel deep respect and admiration for this skill, requiring the ability to use different parts of the body together efficiently travel in Central Asia. Horse persistence and hardiness and ability to interact together are the important components of this national sport. People love and amazed to see these games, held with a great respect, especially on holidays.

“At chabish” One more game, popular with locals and amazing for tourists. This game looks like long distance racing, which evaluates horse’s persistence and speed, together with horseman and fortitude. This race held on holidays and the winner gets trophies, including some cattle and jewelry.

“Kunan chabish” is a competition among three or two years old foals.

“Ulak tartysh” (or “Kok boru”) is ancient game, considerable among central Asian people, especially in regions. This game was invented by shepherds, which had to chase wolves with a purpose to snatch goats and sheep. Nowadays, the rules have changed and the goal of this game is to bring an animal into the entry of competing team through the field center.

“Oodarysh” is an ancient game, some kind of wrestling on horses for the limited period of time, usually not more than ten minutes. The goal of this competition is to throw the contender off the horse or with the animal by using any parts of competitor’s body.

Each gamer is allowed to make three shots.

“Kyz kuumai” is traditional bridal game with a purpose is to catch a girl and kiss the bride standing on horse. The bride’s and the groom’s friends take part in this game.

“Jumby atmai” is an ancient game with firearms, which purpose is to shoot a target on a horse from some distance. This game requires the ability to use different parts of the body together smoothly and efficiently.

“Falconry” is some kind of mixture with sport and hunting. People on horses chase animals and use falcons to catch a fire.