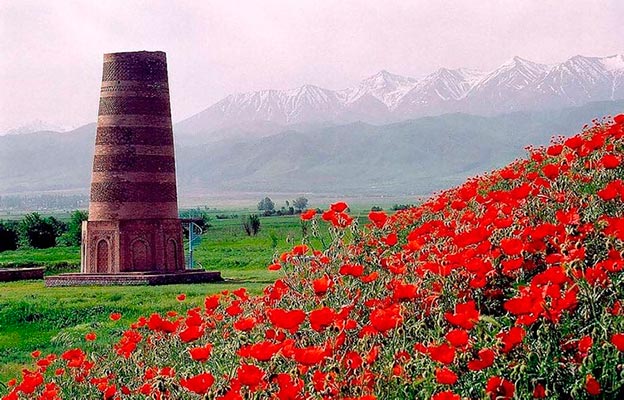 The ancient fortification building is stationed seven kilometers away from the village Tokmok. According to historians, this construction is considered as the first in a similar style, dates back to the eleventh century. Various sources indicate that the height of the minaret was initially about forty-five meters. Up to our days the construction has reached being not more than twenty-five meters height. Partial destruction of the sights is a consequence of both war and time and natural cataclysms. In fifteenth century, there were powerful underground shocks, which significantly destroyed the tower.

The construction has survived numerous historical shocks. In the tens century the territory where the building was located, was under the control of the Karakhanids. For a hundred years the authorities conducted numerous military campaigns in order to seize new lands. And in the middle of the twelfth century the territory of the State was considerably expanded, which can be learned by going on a Great Silk Road tour along the Great Silk Road.

According to scientists this time became an epoch of stormy development of cities. Local administration transfers funds to development of economy, political and trade components making up urban settlements. So, at that time there were built lots of mosques, mausoleums and various fortified constructions. During that period, the Buran tower was built. Active formation of cities ended by the fifteenth century, when cities began to be devastated in time. In a little while, the locals collected all their belongings and went to other territories. In the course time, most of the buildings were destroyed.