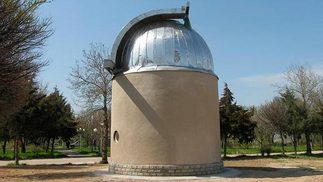 Kitab station was one of the first five stations that appeared in its time. It happened in the 20s of the last century, but it started fully operating two years after opening. Scientists working in the building began to engage in regular observations of latitude. For this purpose, the station was equipped with a special zenith telescope equipped with a clock-pendulum. A little later it was decided to explore not only the latitude but also the longitude, for which a brand new telescope was installed.

At the station there is a slab of marble on which the names of five international stations, including Kitab, are engraved. After almost forty years of fruitful work The Main Pulkovo Astronomical Observatory of the Academy of Sciences provided the Kitab station an anti-aircraft pipe and then test observations started. At the wake of the new century, during the repair work the station was supplemented by a completely new development in the direction of the equipment, a CCD sensor and a GPS-receiver. It affected the overall work. Making observations every night, the station workers could significantly increase the number of measurements of various space objects.

Gradual modernization led to the fact that there was a need for a new building equipped with a folding roof. Design making of the building took a very long time, because, in view of the further development, it was supposed to install not one but three telescopes. But the construction of the building broke all the records of time. It took just two months for builders to erect such a powerful architectural building. The station staff can be proud of results achieved. For many years of work they have received over 50 thousand values of ​​instant latitudes.