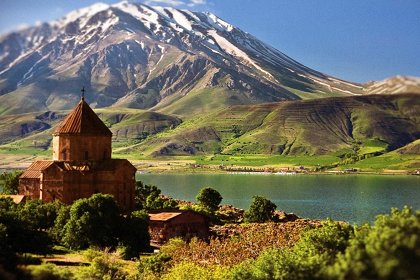 Armenia. The Republic of Armenia is an independent country with great ancient heritage. It is situated on the Armenian Highland in Western Asia. It is located in Eurasia and bordered by Georgia, Turkey, Azerbaijan and Iran. The state also borders to Artsakh, also known as the Nagorno-Karabakh Republic in the south, according to armenia tour guide. The name of the country was given by the neighbors from other states and originated from Aram or Armenak, who was the legendary all Armenians` ancestor.

The area of the Republic of Armenia is approximately 29,743 square kilometers or 11,484 square miles. The mountainous terrain with few forests and fast running rivers is the essential landscape composition of the country. As the Republic has more than 85% mountain area, its average elevation is 10 highest in the world and the land rises more than 4000 meters or 13 400 feet above sea level. Mount Ararat is a symbol of Armenian Land and the highest mountain in the South Caucasus, popular with armenia group tours.

The climate in the country is highland continental and summers are sunny, hot and dry. They last from June to September with fluctuating temperature from 22 °C to 36 °C. Nevertheless, the law humidity reduces the high temperatures effect. Beautiful, vibrant color autumns are long while springs with blooming trees and flowers are short. Winters are cold with a lot of snow. The temperature ranges from −10 °C to −5 °C.

Winter sports are very popular in Armenia. One of the favorite winter activities among the tourists and enthusiasts is skiing on the Tsakhkadzor hills, situated not far from Erevan. The second largest lake in the world is Lake Sevan, located in the highlands of Armenia. Its altitude is about 1900 maters or 6230 feet above sea.

The head of the country is president, who has mostly representational functions, according to the constitution of the state. Prime minister is the head of executive power and government. The legislative branch of the government has legislative power and referred to the National Assembly of the republic is a unicameral parliament. The new constitution, which was written in 2018, has passed from presidential system to governmental system.

The capital of Armenia is the city of Yerevan, which has special administrative status. Appointed by the president, mayor is the chief executive of the capital, divided into twelve autonomous districts having the community status. Additionally, the country consists of ten provinces and each of them has its own self governing community. The communities are considered rural or urban and consist of one or more settlements, classified as villages or towns.

More than 90% of the populations of the country are ethnic Armenians. There are about 1,2% of Yazidis and 0,4% of Russians in Armenia. Ukrainians, Assyrians, Greeks, Jews, Kurds and Georgians are the other minorities.

The official language of the country is Armenian. English and Russian are the foreign languages that most Armenians speak at intermediate level. The old population of Armenia knows Russian very well because of the soviet past. However, the high percentages of adults prefer English language.

The Christianity is the predominant religion of the state, adopted in 301 AD.

There are also Catholic, Protestant, Baptists and Russian Orthodox Churches in Armenia. The Jewish community has two synagogues in Armenia. One of theme is in the city of Yerevan and another is in Sevan, which situated near the famous lake.

There is the Yazidi temple in village Aknalish, which was built for people, who practice Yasidizm. It supposed to be the largest temple in the world.

Armenian cuisine is one of the most delicious, brilliant and diverts cuisines in the world.  It is connected closely to Mediterranean and Eastern cuisines with a large variety of their forms. A lot of vegetables, meat and fish from fast flowing rivers, various herbs, spices and fruits combined in national dishes.  Different forms of wheat, leaves, nuts and sour food are used widely in Armenian cuisine. The high quality of ingredients and spices are the main features of Armenian national cuisine.

The traditional Armenian bread, known as Lavash, originated from ancient times and traditionally prepared only by women.

The national fruits are the apricot and the pomegranate, which symbolize the fertility and wealth.

The national currency of Armenia and the Republic of Artsakh is dram. It has been used since 1993 after proclaiming the independence of the country. There are plenty of currency exchange offices and banks where any guest or tourist can exchange his money into national currency.

Why to visit Armenia: