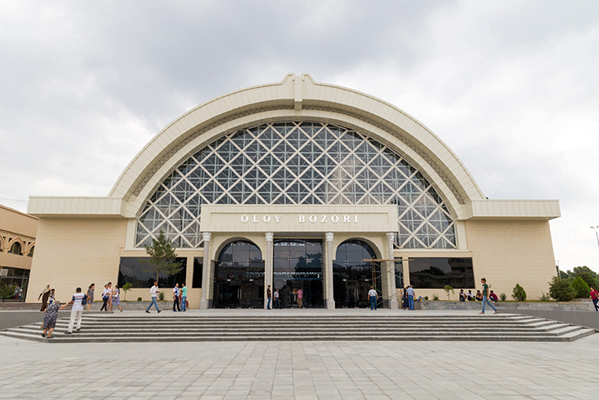 In Tashkent there are more than one and a half tens large markets. But the biggest and the most ancient not only in Uzbekistan, but also in all Central Asia is a market of Eski Dzhuva. It is located in the heart of a so-called Old city, near to the area of Chorsu. In the seventies the XX-th centuries the rebuilding plan of the market taking into account architectural features and traditions of town-planning of last epoch has been confirmed. Today it is a unique complex interconnected, as if the blue domes soaring in air crowning concentric constructions, capitals successfully entered in an architectural ensemble. In the central part of a market the main thing covered with an ornament, a monumental dome construction in diameter about 300-350 metres – a winter three-storied building of a market with lift system towers.

During the spring-and-summer period arrival on a market of fruit and vegetable products which are realised in covered numbers, concentrically located round the above described basic constructions sharply increases. In special gallery under small domes on Eskiz Dzhuva market workshops of handicraftsmen in which they make have taken places and then sell jewels and painted children’s cradles-beshik, gold sewing, the national chests decorated with patterns from metal, embroidered suzane and a band-dzhijak for a covering of a bottom of female wide trousers, man’s dressing gowns-chapany and female paranjas, multi-coloured blankets-kurpachi and the Uzbek national knifes-pichok in a leather or brass sheath, wattled baskets from a rod and trays of the most different sizes and configurations, national musical instruments.

Tinmen and smiths, joiners and woodcarvers work here. Potters-kuloly offer dishes-lagany and deep a bowl-plait, painted with cobalt and turquoise ornaments. When you get to a carpet number and you see carpets from Khiva, Samarkand and Bukhara, Afghanistan and Turkey and even Belgium, involuntarily you recollect that you are in the heart of trade of the Great silk way.

Among described numbers “islets” where trade in flat cakes, Chayhanas where it is possible to regale on gifts of ethnic cuisine and to drink hot black or green tea. Hairdressing salons, billiard, ubiquitous Coca-Cola, ice-cream are too located here. The market in the east is not only the trade place, but also original club where it is possible to meet friends and acquaintances, the centre of national entertainments, here are by word of mouth broadcast news.

The notorious uzun-fist – «a long ear» was born just on a market. Fans here hurry up to loaf about, go in crowd, to feel, so to say, east colour. And still east market – a barometre of a public life. Benches-dukany work – all means easy, were closed at inopportune o’clock – wait for excitements. About that the market of Eski Dzhuva long since was the centre of a city life, building in XV – XVI centuries in immediate proximity from it such monumental cult constructions and to this day decorating a city, as a Friday mosque of Dzhami and medrese Kukeldash testifies. The market has colourfully issued eight inputs and the exits, convenient access roads, wide ladders, some parking places on 1,5-2 thousand motor vehicles, directly in its centre – an input in the underground.

About all markets protected parking places are built, and dehkans can take places in hotels.

Traditional “east” markets are in other cities of Uzbekistan too. In Samarkand there is one of the oldest markets of the Central Asia rustles with human whirlpool. The active life on a market at bottom of a mosque of Bibi-Hanym begins early in the.

We offer Shopping tour to Uzbekistan !