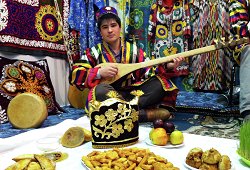 Traditions and customs of Uzbekistan were added by long centuries, by means of junction of traditions and cultural skills of all existing on territory of Uzbekistan of nationalities and tribes. These prominent features do not have number. Each ceremony is in own way original, diverse and bright. The most significant are the ceremonies linked to wedding, home life, a birth of children. More often folk customs represent synthesis of Islamic belief with ancient forms of ceremonialism, sometimes even the magic. Muslim ceremonies have entered into a life of the Uzbekistan people automatically after Islam acceptance. Everywhere Friday is a holiday marked in a mosque by the common prayer (Mohammedan prayer). National traditions and customs proceed in a public life, in a mosque, in chayhana, on a market, in a life of each of us.