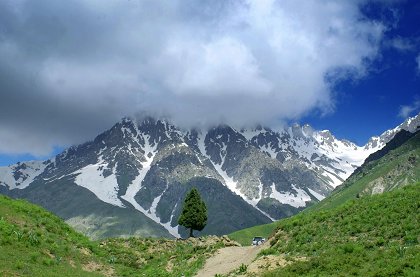 This mountain range is the highest point in Uzbekistan, though the main part of the range is in another neighboring country. Although the mountain peak has no name nowadays, some time ago, during soviet era it was named in honor of CPSU congress. The peak’s height is 4643 meters and it is the highest mountain of the state, however there are some more mountains with 4000 meters height in republic. The mountainous landscape and view differ depending on direction and change from huge solid massifs to hilly slopes.

In addition to this, the range is full of large ground canyons, left by numerous rivers. The largest natural reserve in the country has the same name as the mountain and is a home for rare species of plants, herbs and animals. Snow leopard, brown bear, golden eagle, kumai, lynx and other animals live in this reserve. The place is full of flowers and herbs including:  ash and maple groves, vast grasslands, juniper and others. The slopes are covered with different colorful flowers, especially in spring season travel in central Asia.

Furthermore, this place has lots of natural, architectural and historical attractions, though the range is not popular among the tourists and travelers because of not developed infrastructure and service. Several caves, villages, observatory and canyon are the most visited places of interest. Moreover, tourists will be able to see variety of amazing things including footprints of dinosaurs