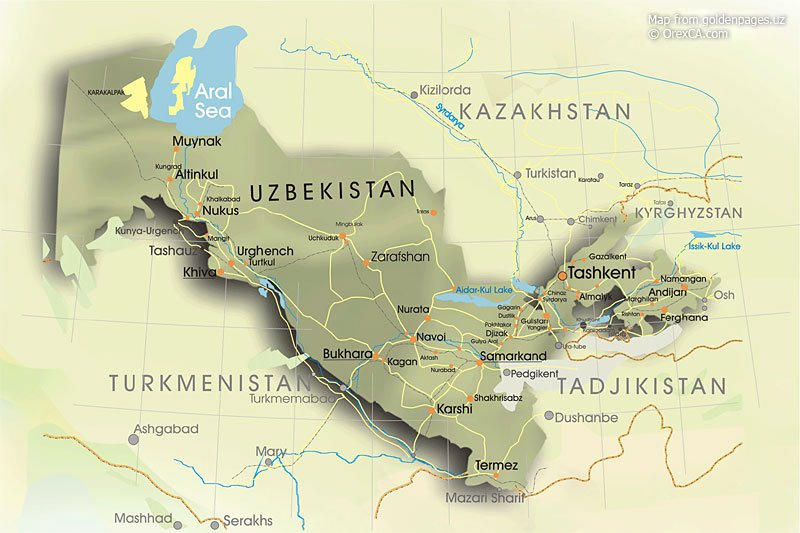 Location: the Central Asia, to the south from Kazakhstan.

The country is surrounded by a land.

The note: the border passes across Aral sea
(420 km. Coasts of Aral sea).

Climate. A country climate deserted-continental. A difference of temperatures depending on a time of year considerable enough. The average January temperature falls to-6°S, and the average July rises to +32°С. The Amount of precipitation isinsignificant, therefore agriculture in a greater degree depends on irrigation.

Internal waters. The majority of the rivers of Uzbekistan dry up in the current, only Amu Darya and Syr-Darya run into Aral sea. In Uzbekistan there are some large artificial lakes, such as the Chardarinsky water basin.

Soils and vegetation. On plains there is the deserted vegetation, in mountains – steppes, woods, mountain meadows prevails.

Fauna. The country fauna is rather various: in desert there is a rare antelope a saiga and a monitor lizard reaching lengths of 1,5 m. In mountains the snow leopard and rare species of mountain goats lives.

Range. Mountains and foothills make about 1/5 territories of republic. In the east prevail average and high-mountainous forms of a relief: slopes enter into republic limits or the terminations of ridges of Western Tjan-Shanja (ridges Ugamsky, Pskemsky, Chatkalsky, Kuraminsky) and Pamiro-scarlet (ridges Zeravshansky, Turkestani, Gissarsky, Kugitangtau, Bajsuntau). To the south and the West, they gradually go down and pass in plains. Between mountains big hollows are stretched: Kashkadarinskii, Surkhan-Darya, Zeravshansky, Samarkand. The largest intermountain hollow is the Fergana hollow (valley) – 370 kilometres, and at width reaches 190 kilometres. From three parties it is framed by mountain ridges and only from the West it is opened. On border with Afghanistan there is an extensive Priamudarinsky hollow.

Modern level of investigation of minerals is connected with development of the richest deposits of the noble, colour and rare metals, all kinds of organic fuel – oil, natural gas and a gas condensate, brown and to a floor of coked coal, combustible slates, the uranium, many kinds of raw materials for building materials.

In Republic Uzbekistan the wide complex of minerals including about 100 kinds of mineral raw materials from which 60 are already used in a national economy is revealed.

On the confirmed stocks of such minerals as gold, uranium, copper, natural gas, tungsten, potash salts, phosphorites, Uzbekistan takes leading places not only in the CIS, but also all over the world. So, on stocks of gold the republic takes the fourth place in the world, and on level of its extraction the seventh place, on copper stocks – the tenth – the eleventh place; uranium – the seventh – the eighth place, and on its extraction – the eleventh – the twelfth place.