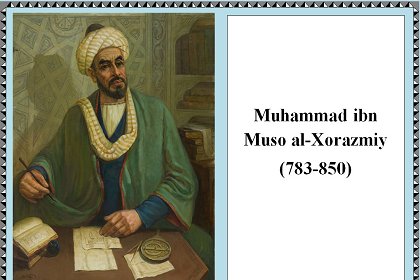 Many historical places attracting tourists by its mystique are very informative, in many respects connected with names of great scientists, therefore Central Asian tour agencies try to open their history as much as possible. One of the key personalities immortalized in memory and who have contributed to the advancement of the sciences is Al Khorezmi. The sources of reliable information about his life are not numerous. It is obvious to consider him as a mathematician, though, despite the Zoroastrian origin, the desire for knowledge allowed him to succeed in astronomy and geography. Naturally, these two sciences are incomprehensible without deep study of history.

Al Khorezmi was born in 780 AD, supposedly the city of his birth is Khiva, Khorezm region. Many factors influenced his awareness of the reality, which led to a firm determination to accept the Islamic faith. Renascence of culture and scientific opinion gave the advantages of a proper education. Native land endowed him with Indian and Grecian conception of social studies, by means of his strive for knowledges.

In 819, being a qualified scientist, Al Khorezmi moved into Baghdad. At that time, the dynasty was ruled by Baghdad caliph Al Mamun, who contributed to the creation of the House of Wisdom, which was headed by Al Khorezmi. The House of wisdom should be perceived as an international academy. Thanks to the activities of Al Khorezmi, the first opportunity to evaluate algebra as an independent science has emerged and was developed a system of classification of different equations. A special appreciation was confered to his manuscript “Al Jabr-val Mukabala”, which turned out to be essential in the origin of mathematic history. The word ‘al jabr’, in translation means algebra. Al Khorezmi made a great contribution to a serious astonomical knowledge. For instance, he compiled a set of astronomical tables and calculated the true location of the planets, determined the appearance of the moon. All the tables were first translated into European and later in Chinese languages.

It has to be noted, that constant travels in Central Asia, played a significant role in the study of geography. Written by him “The Book of a picture of the Earth”, is a list of coordinates of the most important places.