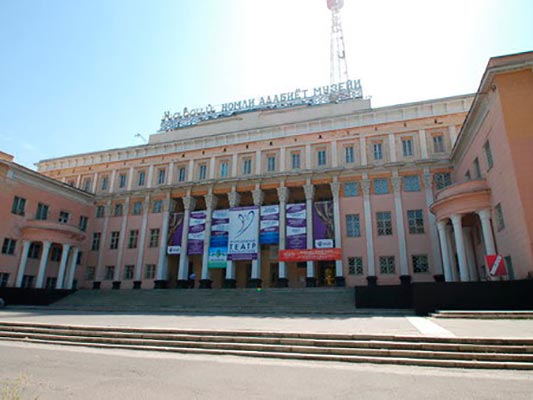 Youth Theatre, located on Navoi Street, 55 (near the old TV tower), in Shayhantaur district of Tashkent city, began its work with the „Uncle Tom’s Cabin“, or rather, by staging this novel, which was successfully played by doctor S. Etienne and painter S. Malt. The organizers and their henchmen were so inspired by the idea that we were able to show the audience a superb performance without the most necessary things – space, costumes and props.

Before the theater began to carry the name of “youth”, it had to go through several important stages of development. Today the theater is working for different kinds of audience. Here kids find their tales, big boys and girls- romantic stories and middle-aged and older spectators- performances, reflecting the world’s problems and joys.

Innovations that the theater actors tried to implement ,such as playing without costumes and scenery, without pre-written script, and randomly born in the course of dialogue with the audience thoughts, were accepted with enthusiasm. Theater actors use other innovations as well. For example, in one of the performances, grooving waves of the sea were shown to viewers in the form of a philosophical theory – instead of waves, in a single dance actors were circling on the stage performing the elements of martial arts. However, the play of actors is so perfect that spectators don’t have to guess what’s going on on the stage. No wonder the talents of the theater regularly take part in festivals and forums, constantly returning home with well-deserved awards.

Every new leader who came to the theater, and there were a few, certainly, made great contribution to the total work and that radically changed the whole team. A major achievement was the opening of a school-studio, the best graduates of which become full-fledged actors of the Youth Theater.