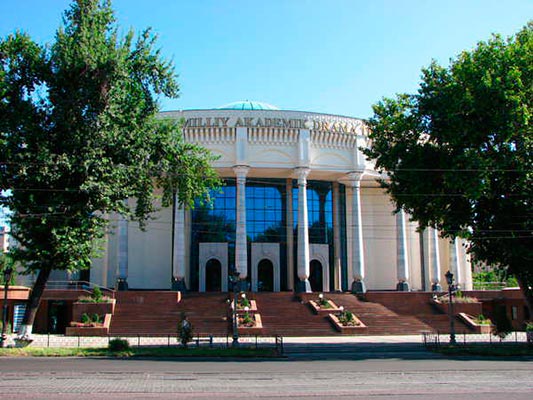 The national theater is located on Navoi Street 34 (Shayhantaur district) near the Circus and Khadra Square. The history of the theater started with the formation of a theater group, which had a beautiful name Toulon. Well-known Uzbek writer, playwright and teacher Abdullah Avloniy became thehead of the troupe. It happened at the beginning of the last century. Over time, a small troupe turned into a professional theater and twenty-three years later on the proposal of the government received the title of Academic Theatre.

Today the theater opens its doors to 540 people. The main repertoire plan is staged in the national Uzbek language. For those guests who cannot understand it, the theater offers a choice of several musical and plastic productions. The show called „O, woman,“ which is based on legends and songs collected in a single Uzbek folklore is quite popular.

Theatrical choice is represented by a variety of genres. Lovers of laugh attend comedy shows, sentimental people choose drama and tragedy and lovers of classic and contemporary works can also pick out something good to their liking. For example, comedic performances are based on a variety of events.It can be a small incident that happened to a hero during a day or fragments of street theater, which enjoyed the interest of the viewer at all times.

The most popular were tales of ancient times, as well as comedic parable of a red apple. Performances begin at 18.30, and only on Mondays its doors closed.