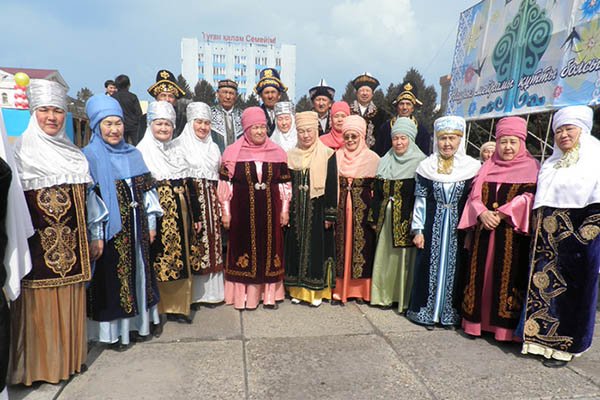 Traditional national costume of any country has always been the epitome of local beliefs, legends, history and culture. Was no exception and the Kazakh national costume, created for years in harsh conditions steppe nomads. Kazakh traditional costume, seasoned cold winds and hot sun, is the best way of material culture of the people who was able to defend its independence. It’s no secret is the fact that the national costume has played a significant role in the development of national consciousness of the Kazakhs.

Everyone knows that the development process is largely due to the factors that surround us every day. Was no exception in this respect and the Kazakh suit different utilitarian and functional. Firstly, it is convenient to ride, which is especially important for the nomadic people. Second, it allows you to optimally adjust the temperature mode. The large changes in temperature Kazakhstan, and therefore national costume will not go scrip in hellish summer heat or freeze while the wind.Complementing the Kazakh traditional costume decorative trim, made ​​with the help of several elements:

Ethnographers have noted that the Kazakh traditional costume has no distinctions based on a person belonging to a particular social class, but there are fine details that distinguish the suit, designed for people of a certain age or gender.

The history of the manufacture of the national costume

For a long time the following materials were used for the production of national Kazakh costume:

The choice in favor of these materials is due to the practicality of the Kazakhs ethnographers who have decided to use the resources that have always been very close view of a well-developed cattle transhumance. The greatest demand among buyers enjoyed fur fur-bearing animals, produced during the hunt. As a rule, for the manufacture of skin was directly coats, called “tone” and the fur was directed to the manufacturing of coats, called “Sas”. Also, the fur was used extensively in the production of other things:

Long-term studies of various archival documents leads to the conclusion that the leather industry in Kazakhstan has reached unprecedented heights. For example, written records, dating back to 1582 year, saying that the Kazakh leather actively sold in Bukhara is more expensive than the best examples of Uzbek clothes. All this allows to speak about high competitiveness of products from Kazakhstan.

Considerable popularity when creating a traditional Kazakh costumes used felts. To create it used white wool obtained from sheep’s lung down to the neck. Master then turned their attention to foreign materials:

In those early years was the costume and the way its owner to declare their financial capabilities. For example, a suit made ​​in a factory, he could buy only very wealthy representative of the feudal nobility. A striking feature of the Kazakh suit has many common elements for people of different social rank:

Property and social differentiation was carried out through a series of easily discernible factors:

For example, truly wealthy Kazakhs could even in inclement weather to wear a lot of gowns. This was put on the bottom most simple robes, which were worn on top of the ones that were the most lavishly decorated.

For many centuries, the Kazakh traditional costume is rich decorative trim. Regardless of gender or social status of its owner, the suit has always had to have a certain amount of decorative materials. For example, actively used lurex embroidery or beads. It is also particularly popular variety of belt decorated with buckles made ​​of precious metals or stones.

Speaking of various precious stones used to decorate the Kazakh national clothes, women deserve special attention and decorative objects. As a rule, their manufacture was carried out of precious or semiprecious materials:

The old masters preferred to use a precious or semi-precious elements are not in pure form but with different additives. Firstly, it is possible to enhance the aesthetic qualities of the product. Second, the master had the opportunity to make a decorative element in the tone of a bathrobe. Most of these ornaments were used as an auxiliary decorative element, however, some of them carried out an independent role. Very popular in those years enjoyed:

The Kazakh suit had a certain differentiation

Long-term research helped establish a national costume that women’s dresses were certain division, based on the age of the fair half of mankind, its bore. Despite this, every lady’s suit is mandatory include the following elements:

As the main outerwear women in Kazakhstan used a fairly broad bathrobes ( “Sapa”), supplemented with long sleeves. These gowns can be warm, equipped with a wool lining, and light. If the region has come a really harsh winter, the women were getting out of the closet coats made ​​of fur, which are called “coupe”.

Certain features have not only women but also men’s clothing style. In most cases, it includes the following components:

In contrast to the national headgear, which was not accepted to give, bathrobes Kazakhs are willing to donate. That is why there is even a belief that this robe can protect its owner from various misadventures. Unfortunately, the traditional Kazakh costume becoming less common on the streets of big cities and towns.Generally, traditional furniture can be seen in various museums and private collections. A pleasant exception is national holidays, when people wear traditional costumes.