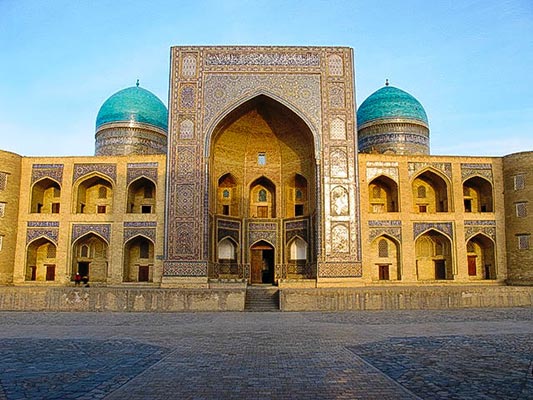 This madrasa is part of the well-known architectural complex On-s-Kalan. Also, it includes a mosque and minaret Kalan. The process of construction of madrassas began in the XVI century AD. It is believed that the initiator and main sponsor of the building was made ​​by Sheikh Abdullah Yamani and Ubaydullah Khan. Direct portal looks at the entrance portal of the mosque Kalan. The minaret was decided to build in the southern part of the complex.

Who wishes to get acquainted with all the decorative variety of the complex, we must pay attention to its southern part. It is here that has survived almost 60% of the decorative mosaic. Madrasah Mir Arab repeatedly became the center of major restoration work, for example, in the seventies of the last century there have been completely remodeled the dome and drums.

Also, this period is in the restoration of the main portal and the courtyard of the complex. Additional support was provided to the southern and central portal. To celebrate the two thousand five hundred years since the founding of Bukhara here was completely renovated decorative component of the entire complex. By 1997, underwent a complete renovation the main facade and the roof of the complex.

The historical function of the madrasas returned only in 1945.