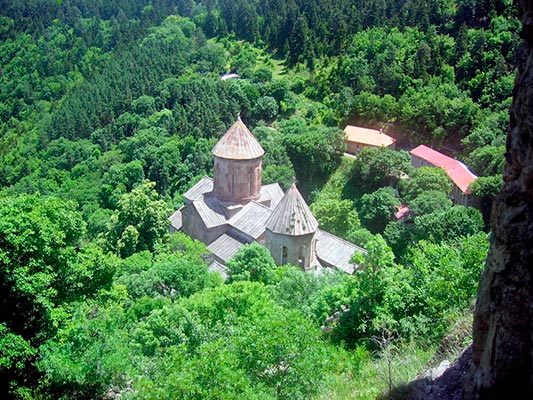 The small resort town, whose population does not exceed one and a half thousand people, has always attracted tourists with its uniqueness. Firstly, you can fully enjoy the quiet, being away from the bustle of the big city. Second, the unique climate and beautiful nature of these places, made ​​the well-known resort of Abastumani more 150 years ago, when many vacationers Russian Empire came here to improve health. Any tour operator in Georgia will help you here to visit.

Locality located in the district of Meskheti ridge at an altitude of about 1.3 kilometers, characterized by a comfortable climate all year round. The abundance of pine trees that surround the Abastumani, to create a near real healing microclimate. Do not be afraid of here the summer heat or winter cold. The natural protection provided in the form of a thick forest and mountain range, protects the town from any abrupt climate change. This microclimate is ideal for tourists, suffering from diseases of the pulmonary system.

The town is located on the banks of Abastumani Otshe at a distance of nearly three dozen kilometers from the nearest settlement. On the one hand, such a large campus distance may cause concern, but on the other hand, vacationers will get here the opportunity to really relax and improve their health.

Tbilisi will help get the Uzbek airline tickets from various countries.

The story of a unique resort

The founder of the resort near the town of Abastumani began almost 150 years ago, known at the time the doctor Remmert, first discovered the healing properties of these places. I do not leave it unattended and numerous hot springs:

The study of physical and chemical composition of the water revealed that its relatively low degree of mineralization can be used per se as a universal preventive and therapeutic tools. The beginning of full operation in the town can be considered as the sixties of the nineteenth century as a medical center, when the first military hospital was opened here. The military is so amazed at the high efficiency of the local mineral springs, that at the beginning of the twentieth century took Abastumani completely under his control.

Not ignore these places and the representatives of the royal family, for example, it was sent in Abastumani suffering from tuberculosis brother of Nicholas II. The subsequent tragic events connected with the death of the royal family, led to a rather rapid decline of the resort. Over the next decades, the tourists here do not come.The situation changed only in the Soviet times, when the first round resort was opened here. After that, the Uzbek airline began to actively bring in holidaymakers region.

The small town of Abastumani can not boast of a large number of clubs, bars and restaurants, but here there are many noteworthy attractions. Church Zarzma monastery, located on the outskirts of the resort town, were built with the direct financial participation of Crown Prince George and the chief architect Otto Simansov, to finish construction in the late nineteenth century.

A special feature of this building is its unique painting made by a famous artist Mikhail Nesterov. The really big in his area of ​​the fresco, unfortunately historians, came to his contemporaries not at its best. Through the efforts of restorers managed to recover only a small part of which were the portraits of the saints, as well as several episodes of the life of Alexander Nevsky.

Despite the desire of local authorities to maintain a leisurely pace of life in the city, private investors continue to open here small hotels, restaurants and cafes. Here tourists can be assured that the abundance of modern infrastructure will transform a cozy town in one more metropolitan city. Local authorities are doing everything to ensure that the usual way of life has not changed here. This last minute tours in the area are always popular.

Another must-see destination in the tourist program of any vacationer should become old houses, erected of stone and wood. It is believed that they lived himself crown prince George. The houses are located in the central part of one of the most beautiful natural parks, where various species of flora and fauna. Both houses are located across from each other at opposite banks of the river Otshe.

The first thing that is required to draw the attention of tourists, so it’s on the overall architecture of the houses, which in any case are not like the location blue-blooded person. Despite. Georgy lived here for more than seven years, and the reigning persons permanently its provedyvat in Abastumani you will not find luxurious palaces or other evidence of luxury.

Wanting to preserve the historical heritage, the local authorities have taken a number of measures aimed at the preservation of historical heritage. Today, both the building where he lived Tsarevich George, are in excellent condition. The only buildings that escape his attention restorers are barns. Today they are in the local monastery property.

Georgian National Astrophysical Observatory – another tourist site that was built in the end of 1932. It is believed that the observatory has become the driving force, stretched the entire town from oblivion. A little further on are the ruins of the observatory “Tamara Castle”, which you can explore by climbing the steep stairs. Old-timers say that there is an ancient underground passage, to find that yet no one has succeeded between the Abastumani and villages. Each tour operator in Georgiawill organize a visit to this place.

Fans leisurely walks in the fresh air can walk on the famous “Ministerial track” above the Abastumani. On this walking trail built in the era of Nicholas II, the superb views over the whole area. Follow this path a little further, you can be in the region of “Gate of charm.” Such poetic name given to a mountain crevice leading to the picturesque plains. Here, being surrounded by a leisurely river, it is a beautiful flower meadow, numerous meadows and so on.