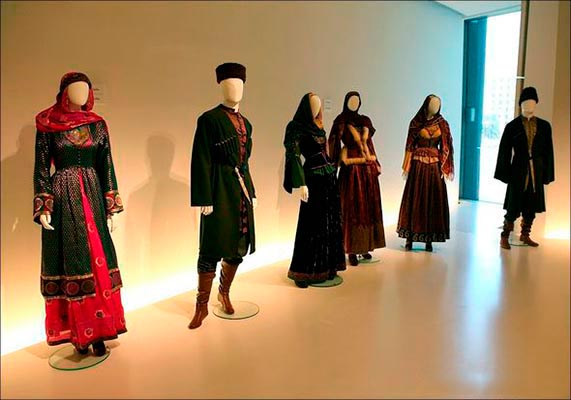 The traditional clothing of Azerbaijanis differs little from the silhouettes of other Caucasian costumes. All the same trousers, fitted caftan and cherkeska or fur coat over. Women’s clothing was full of bright colors, but at the same time it was designed not only to attract, but also to hide the female beauty from prying eyes. Therefore, the beautiful ladies’ hair was concealed under a special cover, and when leaving the house, they put on a kerchief or even a veil. Shoes, both male and female, featured bent noses.

As everywhere on clothes it was easy to judge the prosperity of a man or a woman. Rich Azerbaijanis could afford not only jewelry fine work, but also luxurious garments made of silk, brocade and velvet. If the ladies humiliated their thin hands with bracelets and precious threads with bells, the outstanding position of the representatives of the stronger sex was distinguished by an encrusted bandolier on the Circassian and silver trim of the belt. Nowadays, of course, traditional costumes can be seen in museums, folklore shows or in the outback.

Azerbaijani national dresses are distinguished by a special beauty and original originality. The feminine dress of an elegant silhouette and style subtly emphasizes the slender figures of Azerbaijani girls. Dresses are decorated with embroideries and trim with beautiful gold ribbons and braid. Clothing for men is also original and unique. She does not restrain male movements and emphasizes masculinity. Men’s clothing was sewn mostly from home cashmere and cloth, and women’s clothing was made of silk and velvet. Men’s and women’s underwear was made of cotton and linen cloth, and for wealthy beauties from silk fabric. To see these masterpieces, it’s enough just to go on holiday to Azerbaijan.

The woman’s marital status and age could be determined by the style of her outfit. Young unmarried girls dressed brightly, beautifully. And married women have more modest color tones in costumes.

Clothing shirt shirt was fastened with one button on the neck. The sleeves were mostly straight, wide and long. In front, the lower part of the shirt was lined with coins of gold and silver.

The shirt was covered with chepken (kaftan – long shirt with cuts), which was attached to the body, and on the side of the sides there were sleeves with armlets. They were sewn from velor, brocade silk fabrics (tirma, velvet). Nowadays this beauty can be seen in museums, it is enough to just book a suitable tour with tour operators of Azerbaijan.

Arkhalyg is a common type of shoulder clothes all over Azerbaijan. It was sewn on the lining and tightly covered the body. Some of the Arkhalygs had a wide and straight cut, and on either side of the cuts. Differed and cut sleeves. Used velvet, brocade, tiirma.

Lebbade – it’s quilted robes and lined. A collar of open cut, short sleeves, and tied with a braid on the belt. Collars, sleeves, skirts were laced with braid, and the gown itself was made of velor or shiny fabric.

Eshmek – quilted outer clothing, parts of which were lined with fur: inside, collar, sleeves, hem. The ferret’s fur was used as a basis. They decorated with lace and ribbons of gold threads. You will not see such beauty on vacation in Uzbekistan.

Cuurdu – quilted clothing with an open collar without sleeves, similar to a waistcoat with cuts on the sides. For sewing, velor was used.

Bahari – quilted clothes for women with lining, straight sleeves to the knees and an open collar. Collar, hem, sleeves were lined with braid, chains, edges. They sewed from velor fabrics.

Kjuleche – the top female outfit to the waist with a sleeve below the elbow and a corrugated hem.

Skirts – fogs, length to the floor were sewed from silk or woolen fabrics. Women’s skirts were sewn with patterns and consisted, as a rule, of 12 parts. By cut and style were corrugated, pleated, decorated with pompons of silk colored and gold threads.

Gold or gilded belt women wore over chepken or arhaluka. Also, leather belts covered with coins of silver or a badge were widely used.

Shoes on women were with embroidery, and boots with a long top.

The main female headpiece is a skull cap and a silk kerchief. Chadra was worn by girls when they went out into the street. Without a veil, according to tradition, only girls and elderly women were permitted to walk on the street.

The top man’s shirt was sewn from satin and satin and was fastened with a button or a buttonhole.

Arhaluk densely clasped the body, and the hem was decorated with frills. The cut of the sleeves is straight, gradually tapering at the elbows. On Arhaluk one or two pockets were sewn and he fastened up to the neck. For sewing, cashmere, satin or satin fabric was used. Belt or belt over Arkhaluk was worn by boys, sash – adults, elderly men.

Chukha is the Azerbaijani top men’s clothing with buttons and hinges sewn on the sleeve sections. On the chest, the master’s chuhs wore beautiful stripes for ornaments. Wide men’s trousers were sewed out of wool for riding on horseback. Natural furs and leather were used for sewing winter coats and sheepskin coats.

The headgear for the Azerbaijani man was equated with the material embodiment of honor. The main type of headgear was a man’s hat. She was sewn from the skin of a variety of cuts. Also no less popular were Arakchyns – round headdresses, tight-fitting head. Wore them under their hats and sewed out of silk and decorated with gold embroidery. And also the elderly men wore soft hats made of white coarse calico – tieks.

Of the shoes, men in the villages wore charms – boots with thick soles, and in the cities uniform shoes without patterns. Now national costumes can be seen only in museums or in one of the folklore shows that take place in the hotels of Azerbaijan.