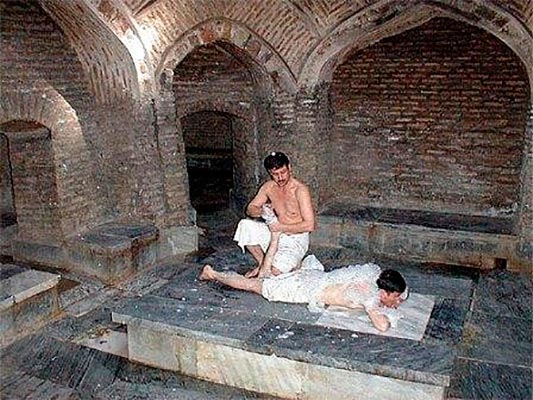 Baku baths, as a separate group, stand out among the huge number of sights and architectural beauties of Old Baku. Tour operators of Azerbaijan recommend to come here not only for ablution, but also to join the culture of the country. The well-known baths built at the Shirvanshahs Palace, the famous bathhouse of Haji Gaib in the Icheri Sheher district, the Aga Mikail bathhouse in the bathhouse quarter, the Kasum Beck bath “The Sweet Bath” acted here. Such diversity can be found only on vacation in Uzbekistan.

The construction of bath facilities follows the general canons of town-planning techniques both throughout the East, and in particular in Baku. Often bathhouses were built in a complex complex of palaces or public buildings located in the central part of the city. And also separately, in the location of the communal and economic city zone. Palace bath deserve special attention, since they were equipped in the palaces of the rulers of the East. The most interesting is the bath complex of the Shirvanshahs palace. Archaeologists discovered it during archaeological research in 1939. This large building consisted of 26 rooms, under the assumptions of scientists, covered with domes and located underground. The main rooms were large two rooms, divided into small rooms. All rooms were divided into external and internal. “Baiyr” – the outer room is designed for undressing, “Icheri” is the inner room for bathing. “Khazna” – reservoirs, which serve hot and icy water, adjacent to the bath. The water was heated in the combustion chamber through steam channels, which is located next to the hot water tank and was located under the floor of the bath. There were places for solitary bathing “hayweti”. The bathhouse had small pools, made in the form of a circle and shelves for shoes. The walls of the bathhouse are decorated with rich decor. They came here not only to restore cleanliness to their bodies, they met here in a pleasant friendly company, they chose local halls for difficult negotiations, they concluded deals under these arches. If you are planning a cultural tour of Azerbaijan, be sure to check out these baths.

Notable are such baths as Aga Mikail and Kasum Beck, built with local architectural traditions in mind. The Kasum Beka bathhouse, located near the Salyan Gate in Icheri Sheher, built in the 18th century, was a model of the architecture of the century and had a beautiful design. In the people it was referred to as the “Sweet Bath”. After bathing, tea and sweets were served. As well as other baths, she had an anteroom, a cloak-room, a bath, a natural pond, and a room for heating the establishment. Banya Aga Mikail, whose structure dates back to the 18th century, was built by a resident of Shemakha Aga Mikail in the south-western part of Icheri Sheher (inner city or fortress). Today the bathhouse is recognized as a historical and architectural reserve. This institution here is usually called a quarter of the bathhouse attendants. It does not differ much from other bathing facilities in the capital of the East, but the rooms for undressing and bathing are square shaped.

The eastern city is not conceivable without baths “hamam”. Bath for the man of the East is the place of ablution and the traditional place of the cultural center. The mental attitude towards the eastern baths was influenced by the hot climate. Bathhouses of the East were intended not only for regular ablution and communication, but also prevention of various diseases. In the Baku baths from the century to the century, a special spirit of cultural communication and unity was traditionally guarded, which made them a club for men. They are colorful and diverse in architectural styles, and are of great interest for tourists. You can organize a visit here yourself, or you can entrust it to the workers of the hotel in Azerbaijan where you stayed.