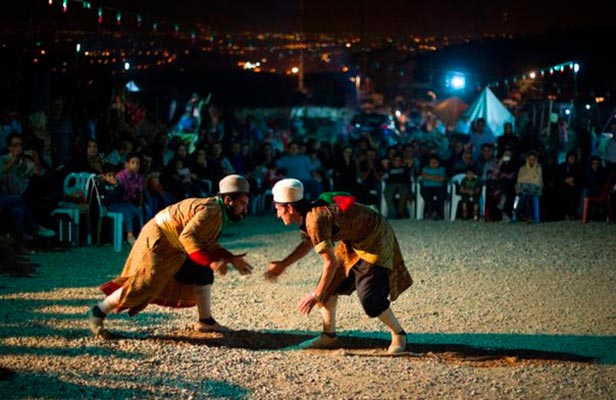 Before the fight, a prelude called “Meidan Gazemok” is held, in the form of a warm-up of the traditional ritual, reminiscent of a symbolic dance. The essence of it is that slim wrestlers – rivals, dressed in colorful trousers with colored patterns and belt girdled, smoothly move around the rug, alternately making swings of hands up and back, swirling in place. Then several times they throw themselves on the floor with the folds of their hands and, touching the chest of the carpet and jumping up, make welcoming gestures with their hands. A welcoming welcome sign is called salami. Having met on the middle of the carpet, they give their hands to each other and alternately make strikes with their right and left shoulders. Next, ready-to-fight fighters, make receptions with quick movements, grabbing their feet with footsteps, throws, sweeps. According to the rules of gulesh, any movements are permissible, except for blows below the abdomen and grasping behind the throat, and one can not turn arms, legs, fingers, do jerking and throw the enemy. In the past, Pahlavans sewed mirror pieces on their knees as proof that they do not touch the carpet with their knees, thereby proving their invincibility. Even on vacation in Uzbekistan, it’s difficult to visit such an amazing sight.