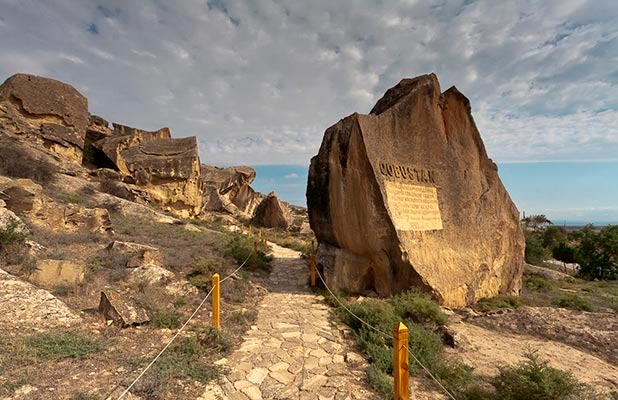 Approximately 50 km. from Baku lies the earth, which seems to be in a different time and physical plane – Gobustan. Local desert landscapes, painted with all shades of yellow, gray and brown, make the hands frantically look for a helmet from the spacesuit, so they do not look like the usual earthly pictures. Try to add a visit to these beauties to your tour of Azerbaijan. The cracked surface of the desert, here and there, is raised by the folds of mud volcanoes, which here are represented in various shapes and sizes. From quite impressive hills to miniature hills. No clouds of acrid smoke and steam – local volcanoes are cold and unperturbed. Even the dirt spattered by them, mixed with water, is never hot. But not only Gobustan is famous for its strange volcanoes – this place is known for its rock paintings. This you will not see, perhaps, and on vacation in Uzbekistan.

The first inhabitants appeared in Gobustan in the primitive epoch. Evidence of this – the places of ancient settlements and rock art, reflecting the world view of our distant ancestors. Most often there are scenes of hunting, images of coveted rams (because according to the beliefs of ancient people, if before hunting to draw and the desired beast, and perform a couple of ceremonial dances – this will cause the victims themselves to go out to the hunters). No less popular are the drawings depicting lush ladies (symbolizing fertility), men on the hunt, and also people in boats. Tour Heirdal, who visited Gobustan, having studied the drawings of boats, came to the conclusion that they were made from reeds, and it is possible that the ancestors of the present Scandinavians came from the territory of Azerbaijan. The theory is interesting, but it has not received confirmation yet. More than 6 thousand drawings can be seen in Gobustan. In addition to the drawings on the walls, one can see here inscriptions that refer to different periods of time. One belongs to an imam who lived in the early Middle Ages, the second was carved by a Roman legionary who came here with the twelfth Lightning Legion. The evidence of his stay in Gobustan was left quite timely, because after a short time this detachment was apparently destroyed by the Absherons. Tour operators of Azerbaijan advise to take an excursion here or to stock up with a guidebook so as not to miss anything interesting.

The most interesting frescoes can be seen in the mountains of Boyukdash (“Big Stone”), Kichikdash (“Little Stone”), Ginhirdag, Shongardag and Shikhgaya. In addition to the rock paintings, scenes from the life of ancient people were recreated here, their hostels were supposedly seen. In Gobustan is the oldest burial place of those times.

Until recently, there was also a strict regime prison on the territory of the national reserve. However, at the insistence of the initiative group, it eventually was postponed.

Come here for one day, as there are no hotels nearby.