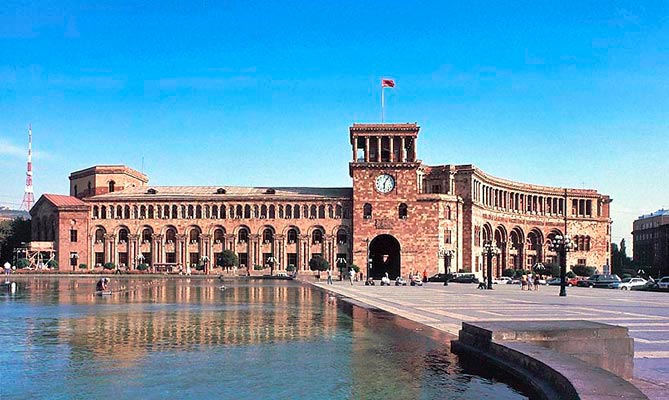 On the east and west side of the guard froze two houses – the House of Government and on the opposite House of Ministries, now a shelter for the Ministry of Foreign Affairs and Energy. The main decoration of the Government House was the tower, he has written a number of high arches and topped by a clock. These are astronomical clock and bell. The building itself resembles the contours of its medieval castle and its shape reminiscent of the traditions of the Armenian architecture. Arches and columns covers whimsical and complex ligature ancient Armenian ornaments, carved directly into the stone column. A similar appearance and has a building of the Ministry. In a fantastic duet stay and two other buildings, they are Post House (or Post Office RA) and «Mariott Armenia”, one of the most luxurious of Armenia Hotel. They cover an area of gentle semicircles and unique shape structures gives rhythmic tone of high arches and narrow windows of the upper floors. Closes ensemble unique structure of the museum complex, where under one roof is the Museum of History and National Gallery. The building itself is more like a palace, and its delicately drawn whimsical bright contours are reflected in the water surface of a large swimming pool, which is in the midst of gently murmuring and soar skyward transparent sparkling fountain jets. That part of the area, which is an oval, paved with beautiful patterns, that a refined mosaic made ​​up of the shiny tiles.No visit to the Republic Square cannot do any tour in Armenia.