註冊
Elite Tours International > Monument to Armenian alphabet and Mashtots, the creator of his 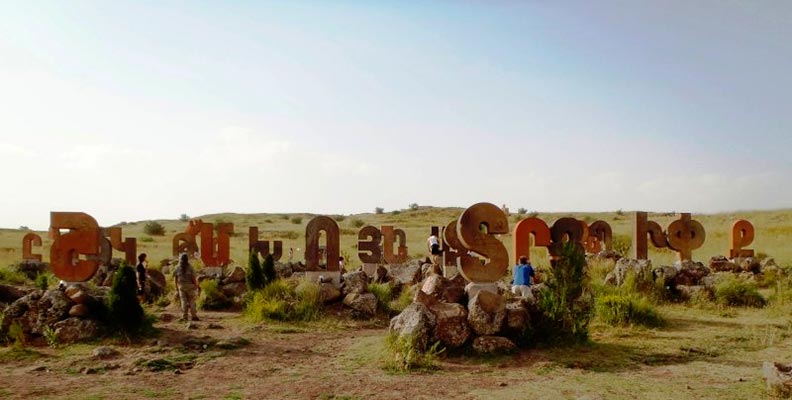 On the slopes of Mount Aragats stands in the lush greenery of the wonderful monument – a monument to the Armenian alphabet. Perhaps it is these facilities and attracts a lot of travelers in this blessed land. Those who once saw this magnificent building will be long remembered majestic letters, number thirty-nine pieces and figure Mesrop Mashtots, the creator of which is surrounded by students. We decided to create a monument to the round date – in 2007 the Armenian alphabet was sixteen centuries. And he still attracts as wealthy vacationers and visitors to the country as part of a cheap tour. The very construction of cut velvet and soft tufa, and worked on its creation, perhaps, all stone-cutters of modern Armenia – everyone from apprentice to master, wanted to contribute to the perpetuation of such Armenian script. Have an idea about the construction of this monument says a lot about the inescapable sense of pride that the Armenians have for these 39 letters. The very presence of a unique alphabet, not unlike any other in the world – is an inexhaustible source of delight, joy and reverence for its founder. No wonder the letters have long since become a symbol of freedom and independence of the nation, as well as its follow glorious traditions of the past sixteen hundred years not writing letters or spelling rules have not undergone significant changes. The visit to this monument usually include a program standard tour of Armenia.

Creating a well-known scientist credited with alphabet Mesrop Mashtots, who lived at the fourth and fifth centuries AD. He was a great educator, who laid the foundations of school education in Armenia, scientist, theologian, a true Christian, readily delivshimsya your faith with others, knew several languages, and therefore engaged also in translation, but the most important thing was a researcher of linguistics, where knowledge helped to create the Armenian alphabet, the phenomenon is absolutely unique. Mesrop Mashtots was in correspondence with many of the leading thinkers of the time, traveled a lot, and not only in Armenia but also in the surrounding countries. After the death of Mesrop Mashtots was canonized at the same time two Armenian churches, Catholic and Apostolic. Tour Operators of Armenia often mention it during excursions.

Some, however, questioned the fact that the great educator invented letters from scratch. No one questioned the fact that the script was finalized Mesrop Mashtots, but it is assumed that writing with a similar font style has been used in Armenia before the birth of the scientist. As an example, usually indicate “the writing of Daniel,” that one of the versions were invented in the fifth century a kind of monk Daniel of Syria. Other scholars see the origins of the elephants of the Armenian alphabet in the Avestan alphabet. Scientists are carefully studying the Armenian language, are some similarities between the script, invented by Mesrop Mashtots and signs, used in Latin, Syriac, Greek, Coptic and Ethiopian languages. Thus, the Armenian alphabet became some collective way, the quintessential sign of the Christian culture of the Middle East. Mesrop Mashtots had a truly brilliant ability to synthesize and analyze a variety of knowledge, and as a result was able to give his people a real crown of the works – the Armenian alphabet.

The result is a unique, no matter what do not like writing, which has no analogues in the world, and it seems with any other tracings direct ties of kinship are not linked.However, some similarities, for example, with the same Greek in the Armenian alphabet is. This is a separate writing letters Pridacha their numerical value, the presence of grafonimov and ligatures. You can find analogues of the Armenian letters and writing of Ethiopian and Coptic languages. But these, too weak linkages with other languages, can not answer the question, what is the prototype of the Armenian alphabet, and so serious studies in this direction are carried out until now.

One of the features of the alphabet is exactly that it transmits sound spoken language form. This saved his ability and the alphabet from a variety of spelling reform, which, for example, do not just affect the composition of the alphabet of the Russian language. Signs of the Armenian alphabet, in terms of design, features original and at the same time restrained simplicity of form – they are not difficult to write and is easy enough to remember. There is also their specific graphic laws, for example, in the mark of the open loop is used mostly and round shapes. When the writing of the letters is easy enough to connect, allowing easy enough to introduce cursive, without changing the shape of the letters too form themselves. The very alphabet, of course, can be attributed not only to the monument of culture, but also a bright artwork, which harmoniously fit into the overall picture of the Armenian culture.

Of course, even in the perfection of time making certain adjustments, and if all the letters, invented by Mesrop Mashtots, survived and lived through sixteen centuries, the very style of writing over the years changed several times. Since their introduction to the twelfth century and was made an erkatagir (which means iron), which was attended by several subspecies. Then, for two centuries had circulated boloragir or circular letter. It is not clear why this typeface gave it this name because the letters are endowed with are not smooth, but rather a sharp outlines. From the sixteenth to the eighteenth century used the notarial letter, otherwise notragir, which as a result was reborn as a modern version of shorthand called here shlhagir.

To personally see all 39 characters and their creator, and even take a picture on the background of the prettiest your heart – do the signs carved in the value of human growth, you need to get to the village Artashavan. How to do it – book a tour, take a taxi or use public transport, you can find out from employees of the hotels in Armenia where you left off. They will help you choose the best option.