Tours from Tashkent to Samarkand 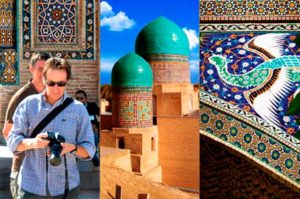 Policy authorities of the country, aimed at the development of national tourism, constantly bring positive results. Today more and more not only the citizens and guests of the country, but also of tourists buy tours from Tashkent to Samarkand by train or bus. Previously, this could only dream, but as far as the implementation of important infrastructure projects, tourists could be interested in other settlements of the country.

Tours to Samarkand from Tashkent are very popular

In our company, which sells tours Tashkent – Bukhara – Samarkand, we believe that Tashkent is not only deserves the attention of tourists. Every corner of the country is fraught with many secrets, facing the fact that they have unraveled. For example, we offer a tour that allows you to get acquainted with samples of traditional ancient architecture. A variety of tours Tashkent – Bukhara – Samarkand provide an opportunity to get acquainted not only with the places where the events took place last year, but also to touch the ancient architecture.

A few decades ago, the process of moving between localities of the country could take a very long time, but with the advent of comfortable trains all became much easier:

Many foreign tourists rightly noted that Uzbekistan is one of the lowest in the region fares in rail transport. So, by the historical and cultural tour of Samarkand-Bukhara-Khiva, do not over-saving, trying to cross the distance between these cities by bus or by car.

Turning to our company, you not only get professional advice, but also a detailed list of all the necessary documents.