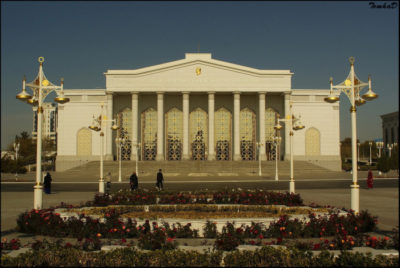 Administration does not sponsor playhouse unfortunately; it still continues playing at weekends at 7 p.m. Tremendous fountain of different colors located before construction attracts many people, locals and Turkmenistan tour travelers, who walk through city. There are many beautiful plants, trees featuring flower beds around the building.

This theater is alone of its kind puppet stage, established by city’s authorities featuring private company.  It is performing forty puppet plays per season for Turkmenistan group tours.

Building established early 2005 takes large area and several halls including one for 200 seats and another count on 300 people.

Playhouse creative work mainly addressed to young audience. As there was no poppet playhouse throughout country so puppeteers had to perform in other places. Nowadays, when modern complex has been built it can take many children. It has its own troupe with more than 40 performances repertoire.