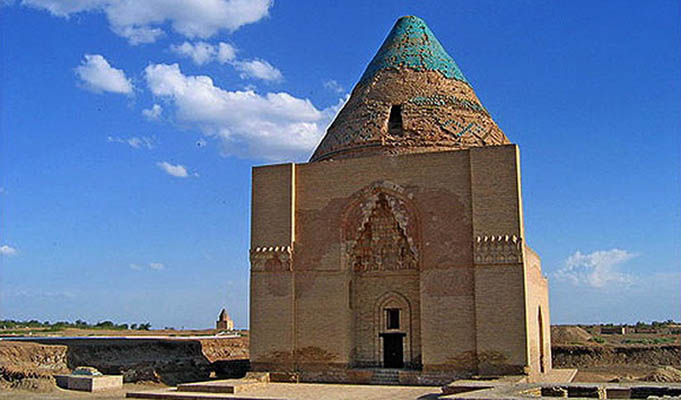 Among all fans of historical tourism, using the Turkmen Airlines to get here, there are those who prefer to enjoy the ancient monuments in their original form. This means that tourists want to see the ancient fortress or an ancient mosque in its original form, and not after the “European-quality repair.”

One of these monuments belonging to the era of ancient Urgench is a mausoleum Khorezmshah Tekesh. Some documentary sources it is often called the mausoleum of Sultan Tekesh. Today, this national monument is located near the scale of another Turkmen celebrity – Timur minaret Qutlugh.

Architectural features of the mausoleum

The upper part of the mausoleum represented by a large dome conical shape, and decorated with blue tiles. The dome itself is on a massive drum. It is believed that this monument and mausoleum of Il Arslan is the resting place of the representatives of different clans, Khorezm. For example, there is evidence of burial is one of the most notorious rulers Gurganj-Tekesh who found their last resting place here in 1200. Despite their fearsome and very eccentric character he was able to significantly expand the boundaries of the state:

By 1127, this building becomes a place of fierce struggle for the throne. Slightly eccentric ruler asks for help from his opponents. Karakitais promised Gurganj-Tekesh his help, but the latter had to pay him for a long time in advance the size of the stipulated tribute. The target of the conspirators was the brother of the ruler’s power craving. After the seizure of power plan to succeed, Gurganj-Tekesh ordered the execution of his brother and mother.

For several years, the mausoleum was famous for its more than three dozen meters high. For many caravan he remained certain beacon makes it easy to find a way, even during a severe storm. With its sumptuous decoration of the mausoleum holds put on a par with the mausoleum in Merv.

If you want to look here, then choose a hotel and come. Any hotel in Ashgabat are prepared to offer excellent service and an extensive cultural program for democratic prices.