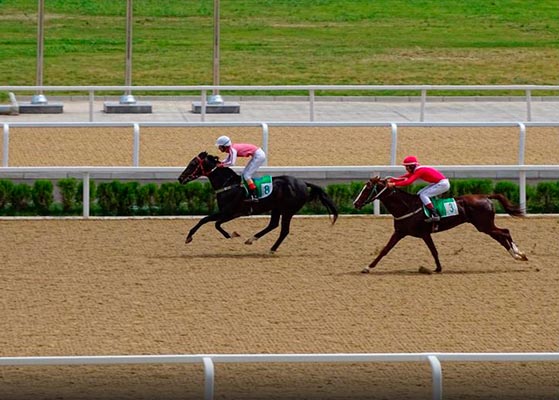 The Hippodrome in Ashgabat is located on the edge of town. The State Hippodrome acquired the current appearance in 2008 after reconstruction. The grand opening was attended by diplomatic representatives from various countries in the world. The event was visited by President Gurbanguly Berdimuhamedov as well. On this day the winners of six races were awarded presidential prizes – 18 cars. By the way, the President of Turkmenistan himself is an experienced rider, a great connoisseur and a lover of horses. He occasionally participates in the award winning races on his own horses.

From side the end the glass building has a shape of a horseshoe. In the open area of it there is an amphitheater for 1,000 people and in a closed there is a hall for celebrations with a capacity of 500 people.

You can have a snack waiting for the races in one of six cafeterias, imitating the Turkmen yurt. Along with national dishes and European dishes are also served.

The International horse-racing complex has a large monitor. Thanks to it, viewers will see the most important moments of the races without binoculars.

In 2013, near the racetrack appeared a monument dedicated to the famous Akhal-Teke horses. No wonder Turkmens like the horses and respect equestrian events, too. It is a fact that in Turkmenistan in April Akhalteke horse day is celebrated.