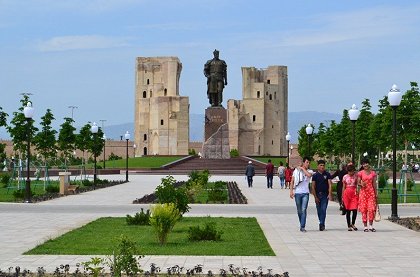 On February 8, the State Tourism Development Committee of the Republic of Uzbekistan and the Kashkadarya region Hokimiyat organized an information tour in Shahrisabz for media journalists and tour operators.

The main purpose of the event is to draw the attention of journalists to the unique region of the Kashkadarya region for the development of tourism and present possible tourist routes and festivals on various topics.

Shakhrisabz is considered to be a garden city. It is famous worldwide for its unique architectural monuments, most of which were built during the reign of Timur and Timurids. The majestic white palace with the name Ak-Saray, the Kok-Gumbaz mosque with a huge blue dome, the monumental complexes Dorut-Tilljavat, Dorus-Saodat and other places of interest of Shakhrisabz turn Amir Timur’s home monastery into the second metropolitan city, in its luxury, not inferior to Samarkand.

As it is known, on December 14, 2018, President of the Republic of Uzbekistan Shavkat Mirziyoyev announced the transformation of the city of Shakhrisabz into a city of festivals at a meeting that was held with the participation of regional and regional khokims, heads of sectors. The plan takes into account the development of additional types of tourism, in addition to event and cultural and educational, and in Shakhrisabz, Yakkabag, Kitab and Kamachinsky districts, tourist infrastructure facilities will be created.

According to the organizers, the city of Shakhrisabz will be turned into the “City of Festivals” through various cultural and entertainment events and conferences throughout the year.

Today in the region there are 1321 objects of cultural and historical heritage, 50 accommodation facilities (2682 places), more than 100 restaurants of national and European cuisine and teahouses of national style, 15 tour operators. At the same time, 12 tourist-class vehicles and 43 guide-interpreters serve tourists.

In the period from January to November 2018, the region was visited by 1.4 million tourists, of which 62.7 thousand were foreign tourists. The number of foreign tourists has tripled.

In 2019, the organizers plan to hold more than 10 festivals, such as the festival of folk groups, the birthday of Amir Timur, a folk dance competition, kupkari, the Gissar Mountains eco-festival, an international kurash tournament, a crafts festival, etc.

In addition, it is planned to implement 72 projects aimed at the further development of the tourist potential and infrastructure of the Kashkadarya region in 2019-2020, in particular: the organization of hotels, the construction of 40 guest houses, cottages and houses and recreation centers