Meet in the airport and transfer to hotel.

Breakfast. Sightseeing the Dushanbe city: Dushanbe is the capital and largest city of Tajikistan. Dushanbe means “Monday” in Tajik (Persian language), and the name reflects the fact that the city grew on the site of a village that originally was a popular Monday marketplace. Situated at the confluence of two rivers, Varzob and Kofarnihon.

You will see Fan Mountains – a popular tourism and mountain climbing area in Tajikistan. There are about 100 passes in height from 3200 to 5060 m (Mirali). The Fan Mountains are the highest part of Zeravshan range with 11 peaks above 5,000 m with sharp fantastical pointed forms. In the bosom of these mountains are about 30 lakes, the largest of which are Iskandarkul, and the most beautiful and picturesque, famous for the unique play of colors – Kulikalon.

Iskandarkul lake:  length – 5 км, width – 3,5 км and depth to – 80 м, located at height 2250 м. The heart of Fan mountains, the treasure of Tyan-Shan, a scenic Iskandarkul lake is one of the most beautiful lakes in Tajikistan. Having emerald green and blue color. A fast flouring Iskandar-darya river flows from the lake, forming a marvelous and gorgeous waterfall, so called the “Fan Niagara” that falls from the height 38 meters.

Dinner and overnight in the guest house.

Breakfast.  Drive to Penjikent. The city of Penjikent (“five villages”) is located in Khujand area of Tajikistan in a picturesque Zeravshan river valley. Quite possibly the five villages started the history of this remarkable city which originated in the 5th-8th centuries AD. Penjikent of that time was one of the most important cultural and crafts centers of Sogd. It was even named “Central Asian Pompeii”. Sightseeing the city.

Picnic near the lake

Drive back to Penjekent city.

Dinner and overnight in Penjekent

Breakfast. Drive to Istarafshan city: Istaravshan is a museum city, the ancient center of trade and crafts, one of the most ancient cities of the Central Asia. In 2002 Istaravshan turned 2,500 years old.  The city was founded in the sixth century B.C. by a Akhemenid king Cyrus who fortified the settlement by means of three wall lines and a citadel. In the second – seventh centuries B.C. the ancient sentiment Mugteppa was located on the territory of Istaravshan. Mugteppa was the residence of the local aristocracy who erected there numerous palaces distinguished by original expressive architecture. The evidence of that was found in Bundzhikat (Kala and Kakh-Kakh) and Chil’khudzhra settlements which had fortified structures with palaces and cult buildings decorated with paintings and carved panels. For example in Bundzhikat the archaeologists found the painting with the image of a she-wolf feeding two babies – the symbol of contacts between the West and the Orient. During the years of Arabian sovereignty Istaravshan became a province Arabian Caliphate. It was at this time when Islamic architectural structures of portal-dome design such as mosques, madrasahs, mausoleums, minarets, etc. started to appear.

Evening walking in the central park.

Dinner and overnight in Khujand

Khujand is the capital of northern Tajikistan and the second largest city in the country. The city’s history dates back to ancient times. In the opinion of historians legendary city of Alexander-Eskhata (Alexandria Extreme) was constructed by Alexander the Great on the place of the present Khujand (the 5th century BC) and become the city of highly developed culture, important commercial and crafts center. It in many respects speaks it can be explained by its favorable position. Khujand stands at the entrance to the fertile Fergana Valley. Owing to this it was one of the main centers of the Great Silk way and enjoyed prosperity and richness. One of the ancient cities of the Central Asia Khujandhas been known since the 7th century. In the 19th century after the Russian intrusionKhujand became the center of district of rapid industrial development.

After the lunch drive through the river Syrdarya to Tashkent. Border formalities. Drive to Tashkent (100km). Arrival to Tashkent.

After breakfast sightseeing Tashkent. Today you can see the contrast between the old and modern city. Visiting old town you will enjoy oriental bazaar Chorsu which is open daily from morning till evening. Visit of Khasti Imam complex that  includes Barakhan madrasa of XVI C, Mui Muborak library where you can see the holy book Qoran of VII C, and the new biggest mosque Hazrati Imam built in 2007 when Tashkent was announced as a Center of Islamic culture.

Extras to do in Tashkent:

In the afternoon depart and drive to Samarkand. Arrival to Samarkand, check in to the hotel. Samarkand, the capital of ancient Sogdiana, is one of the oldest cities in the world, of the same age as Rome, Athens and Babylon, estimated 25 centuries old. During those centuries the city has survived many great and dramatic events. Samarkand saw Saka and Massagets, Greeks and Macedonians, Karakitais, Arab commanders and hordes of Genghis Khan. Under Amir Timur’s rule, Samarkand became the capital of his huge empire. The Great Silk Road went through the city. Hsuan Tsang visited Samarkand on his way to India. Half day sightseeing.

Visit Gur Emir mausoleum, family graveyard of Temur and his sons, teacher and grandchildren. Supposed to be the Mausoleum of his grandson Muhammad Sultan, but due to sudden death of Temur and due to other cistcumstances became the grave of Temur and his relatives.

Full day sightseeing Samarkand. Famous Registan Square-known from the 13th century AD as a bazaar square, was the centre of trade and cultural life in medieval Samarkand. It is surrounded by 3 madrasahs of different periods. Bibi Khanum Mosque, built by Temur and devoted to his favorite wife, however other legends say that it was built by his wife as present to him for his successful invasion of India in 1399.

Afrosiab Site & Museum: It is the area of 212 hectares mostly hilly surrounded by a moat. Here was situated ancient Afrosiab (old name of Samarkand). It had existed from 6th century BC till the 13th AD. Now archaeologists here continuously conduct excavations. The museum displays: the model of ancient city and fortress walls, pottery, weaponry, coinage, altars and most of all the mural painting of the 7th century. Ulugbek observatory: the remnants of the XV century observatory, built by Ulugbek, grandson of Amir Timur. Shahi-Zinda Necropolis-beautifully decorated with tile work complex of mausoleums Xth-XV centuries.

Extras to do in Samarkand:

In the morning depart Samarkand and drive to Bukhara via Shakhrisabz. Arrival to Shakhrisabz visit remains of Ak-Saray Palace, Kok-Gumbaz Mosque, Khazrati Imom Ensemble. After sightseeing Shakhrisabz continue driving to Bukhara. Arrival to Bukhara, check in to the hotel.

Today Visit includes trade domes of Bukhara. Bukhara was cultural, Islamic and trade center of central asia.  Taki Zargaron,special market place for golden jewlwery in ancient times, but still at present you can find some modern and antique jewelry. Medrese Ulugbek and Abdulazizkhan madrasa, which is famous as Kosh madrasa or double madrasas facing to each other, but built in different periods 16 and 17 C. Tim Abdullakhan, was a covered market, nowadays it is antique shop of Carpets and silk fabrics.  Taki Telpakfurushon,market of hats. Bukhara was also famous for its karakul sheep’s fur and this market was the special place for that.  Magoki-Attori mosque, used to be temple of Bhuddist, bazaar of spices and mosque. At present it is museum of carpets of Central Asia and Uzbekistan. Taki Sarafon, money exchange center, during silk road trades it was used as an exchange market.Lyabi Hauz Complex including Nadir Divan Begi medresah and Khanaqa, also known as Jewish community center, where you can visit Jewsh school and synagogue.  Medrese Chor-Minor. Overnight at the hotel.

Continue sightseeing of Bukhara. Trip to summer palace (15 km) of Bukhara emirs “Sitorai-Mokhikhosa”. In the afternoon free time in Bukhara.

Extras to do in Bukhara:

In the morning depart Bukhara and flight to Tashkent.  Arrive in Tashkent. Transfer to the International airport . Flight home 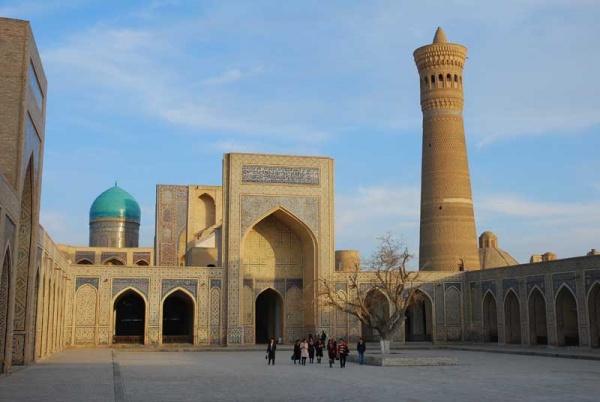 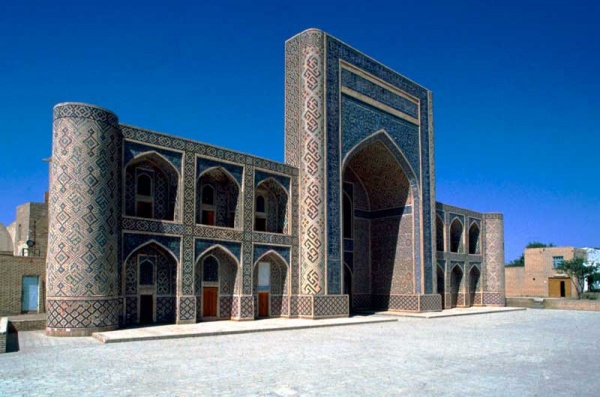 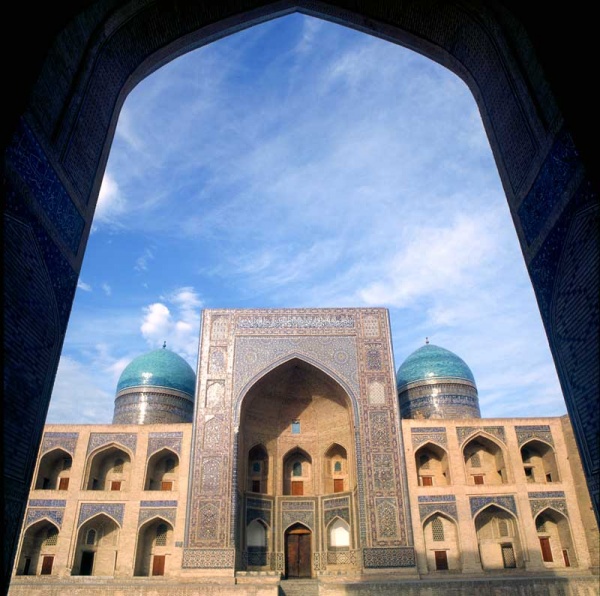 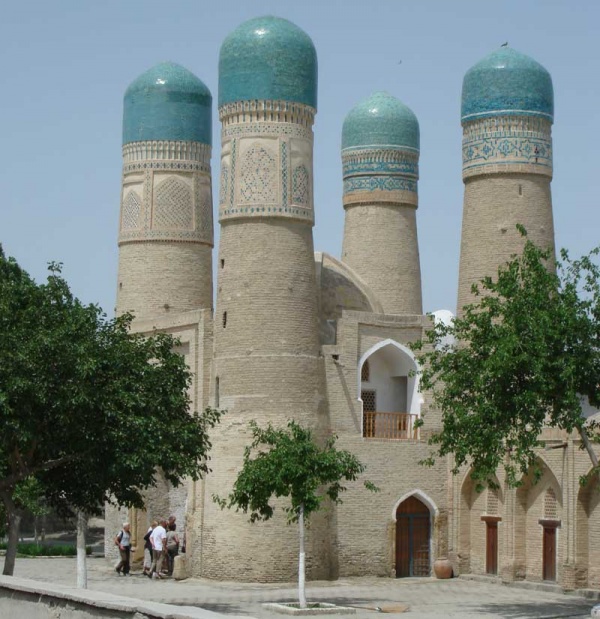 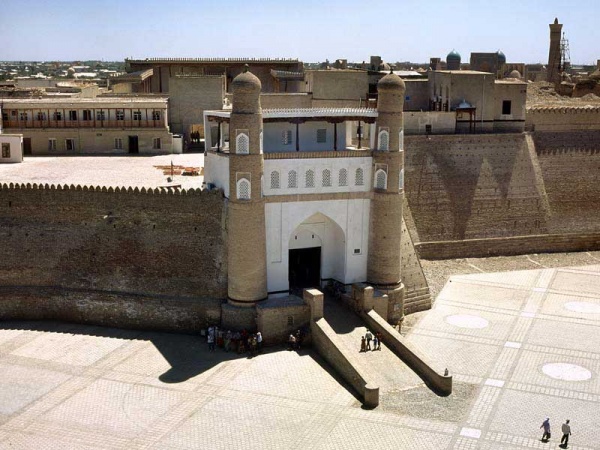