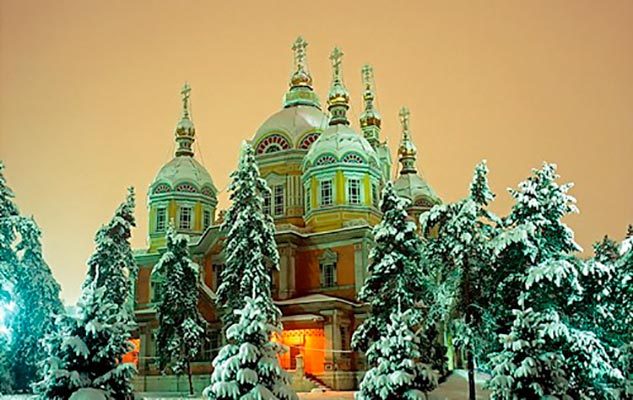 Historical tourism always took not the last place among those who choose the last-minute travel offers allowing to get acquainted with beauty of Kazakhstan. One of such sights is the Ascension Cathedral located in the city of Almaty. According to official documents, this monument of architecture was constructed in an interval between 1904 and 1907. K. Borisoglebsky and A. Zenkov directed construction process. As the main construction material architects decided to use the real Tien Shan fir-tree.

Architectural features of the Cathedral

The unusual form of cathedral, not to mention the materials used for its construction, permanently attracts great variety of tourists here. Many experts who visited here speak with confidence that it is impossible to find construction of the similar plan in the world any more anywhere. Many could object that wooden construction is physically not capable to sustain as influence of time, and natural disasters, however the earthquake of 1911 proved the return.

Destructive violence of the nature in literal sense erased about the person of the earth many constructions in the city, and left churches without bells and bell towers. In wooden church no destructions existed. Only the cross standing just before cathedral slightly was lop-sided. The cathedral is obliged by so high level of durability to the way of construction chosen by architects – the numerous sections made of a tree were fastened by means of big iron bolts.

Where each tour operator across Kazakhstan is ready to organize cathedral, an excursion, differs not only in high-quality construction, but also long work of the builders who were engaged in decoration of an internal and external part of cult construction. In cathedral it is possible to see painting, improbable on the beauty, and on the way to it – a set of the decorative elements placed on a facade.

Unfortunately, what was beyond the power to make the elements was made by the Soviet power. For several decades the cathedral was exposed to plunders and destruction. Old residents tell about the improbable case which occurred in the early thirties the last century. At that time local authorities made the order to remove all crosses, domes and somehow precious things. One of the workers who went to a roof to remove crosses, broke and broke. Other workers were so struck with it that none of them decided to tempt the highest forces for the second time.

With development of socialism in the territory of Kazakhstan the cathedral turned into the country’s first radio station which broadcast news of Astana and other regions. After that here the small museum opened, and it was replaced by a full-fledged warehouse. For the first time the leg of the restorer crossed this dawn in the late seventies of the last century. The cathedral returned to the main functional destination since 1995. Then here frescos, a stucco molding and so on appeared.

The fans of historical tourism wishing to get acquainted independently with objects of national cultural heritage can safely choose tourism вУзбекистан, Kazakhstan and so on to make the real trip in long ago the left eras.