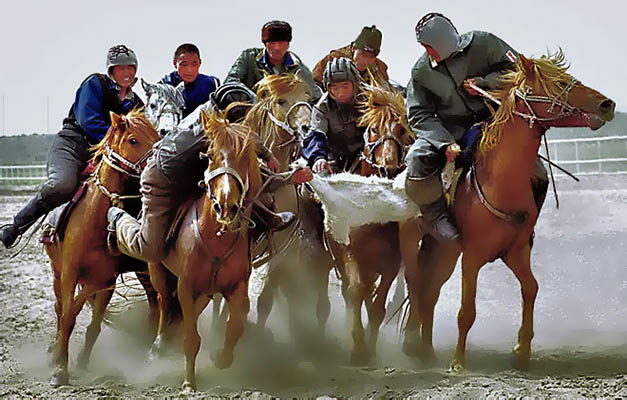 Bright feature of the Kazakh culture are the numerous games reflecting all depth of cultural heritage of the country. Historians note that the most part of national games appeared at the beginning of formation of the Kazakh culture, having passed then a huge way up to now. Some of these games, unfortunately, did not remain, however, scientists-ethnographers managed to restore a certain part. At the same time it is important to note that regardless of the ultimate goal, all Kazakh games surely carried out an important social role:

education of younger generation;
military and sports preparation;
commemoration of the left ancestors;
holding thematic pleasure actions;
form of activization of social communication within one sort or clan.

The military sports allowing to transfer to youth necessary skills of survival in living conditions of nomads were considered as especially important:

training in attacks;
transfer of the basic rules of warfare;
search and production of livelihood in steppe conditions.

Also Kazakhs appreciated the games contributing to the development in representatives of one clan of various social skills. For example, enjoyed special popularity:

The detailed research of numerous archaeological artifacts helped to establish that the most part of games a little not only the social or training impact on people, but also ceremonial. For example, the funeral ceremony or wedding was perfected at Kazakhs to swords. The most known games directed to studying of ceremonial features were:

It is separately necessary to stop on the fact that the most part of all Kazakh national games had exclusively public character. Ethnographers explain it with desire of skilled nomads to transfer the skills to younger generation. The practical experience shows that the collective way of training allows not only to expand an influence aura, but also to increase efficiency of the process. At collective games of people studies not only itself, but also helps others.

The most significant Kazakh traditional games

Development of public relationship constantly affected traditional the Kazakh games. Among their general quantity, on the basis of a research of many historical documents, and mass funeral ceremonies and classical jumps were considered as the most significant. The funeral ceremony called in the country the Expert was always held to certain time in honor of the elder of a sort who left this world long ago. This day all people, regardless of their social or property status, gathered in earlier stipulated place. The commemorative events becoming a part of legends and songs continued from three days to one week.

During the funeral ceremony various national games and also various competitions were constantly held. In the last day of a grandiose ceremony one of the biggest races called Alaman of a bayg was always arranged. Historians at the same time note that results of these races became for long months the main subject for discussion, but not glorification of memory of the most worthy Kazakh who left this world.