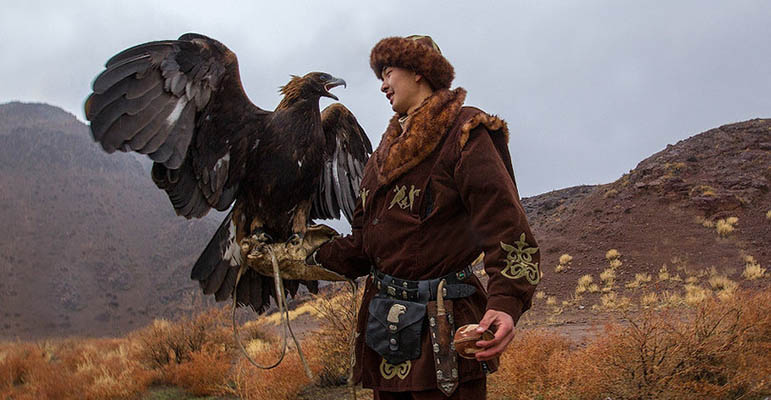 Kazakhs, being ancestors of the nomadic people, always with special awe treated hunting. In national culture and literature exists many example of how representatives of different generations hunted fur animals or birds. At the same time it is important to note that the passion to hunting did not become the reason of especially cruel attitude of Kazakhs to the nature. Since small years the Kazakh is brought up so that he grew and developed together with the animal and flora surrounding him.

Today there are many historical data allowing to restore fully special relationship of Kazakhs with the nature throughout many centuries. Kazakhs always gave preference to various natural crafts:

The nomadic people were forced to live in difficult conditions therefore they also made thrifty use really of the golden eagle, fleet dogs and horses. The people able to catch professionally dogs or to bring up birds for hunting were held in Nabolshy respect among Kazakhs. It can easily be tracked on the basis of a set of the myths and legends existing in the Kazakh folklore.

One of legends tells that in an extreme antiquity there lived really professional hunters possessing the best hunting animals and birds. A specific place among them was held by the golden eagle bearing a name to Curd cake that is translated as “a bird of red color”. Owned this bird of people who was called Tiney able to catch any production without any problem. Tell legends and of famous Zhalaire Shora who became famous for the unique golden eagle. There was enough only one look that Zhalaire could call a look and age of a hunting bird with an accuracy.

For many years hunters hunting birds managed to tame and bring up various representatives of feathery brotherhood:

Despite success of process of education of hunting birds of different types, among Kazakhs the golden eagle who was also called “a steppe eagle” enjoyed special popularity only. Throughout many centuries “Bird’s God” as he with big respect was called by Kazakhs, helped to find production even in the most hard times. The powerful body of a bird was capable to catch and bring production to the owner very quickly.

Process of training of hunting birds took a lot of time

Historians note that process of training of a bird for full hunting could take a lot of time. Even the most experienced trainers could not cultivate quickly in feathery qualities, necessary for hunting. It is necessary to understand that not each bird was suitable for hunting. Trainers gave preference to birds who differed:

The good golden eagle, far gave in not at once to training. The strong and proud bird always sought to stand on the hind legs. Cases when the golden eagle attacked the trainer that could lead to serious injuries of the last were frequent. However, when process of education approached the end, results fully compensated all expenses of the trainer. Now the prepared bird is capable to contend in speed with a wolf, and in cunning – with a fox.

The Kazakh hunting had the features

In national culture there was a tradition of individual and collective hunting. The number of hunters in many respects was defined by an ultimate goal or strength of an animal whom planned to catch. Hunters always developed the detailed plan which considered the most important features of an animal or a bird:

Detailed accounting of all features allowed hunters to increase effectiveness of the work significantly. If the group of people went to hunting, then among them there was a clear split of duties. As a rule, only people with wide experience which could not only increase efficiency of the hunting, but also save the person from a wild animal who easily could have a dinner with the hunter went shooting.

Its deep philosophy was feature of the Kazakh hunting. Unlike many people where hunting was in many respects in the way to have a good time or just to catch a desired trophy in the collection, in Kazakhstan hunters saw in this process slightly other washed away. Any Kazakh could not even afford to go in thoughts to hunting for the sake of own amusement. In the Kazakh culture hunting included several concepts:

In Kazakhstan hunting was always connected with festive actions. Was considered that person who went to hunting was it is necessary to carry out in a special way. Only in this case the hunter would be promoted by good luck. As a rule, traditional hunting included several obligatory participants:

The ceremony began in the area which was full of a game. Here hunters established a yurta then the grandiose holiday began. The group of hunters could remain more than a month on one place, replacing the campaigns behind production by a bright holiday.

Before departure on search of a game, owners of hunting birds dressed the special equipment including a small cap on the wards. It helped a bird to remain always concentrated and not to be distracted by extraneous noises. When on the horizon there was a production, the fast movement the hunter pulled off a cap from the head of a golden eagle who immediately went behind the purpose. Hunters at the same time remained on the place, expecting when it is possible to go to take away a game.

Also various round-ups enjoyed special popularity. The group of people specially came in the place where various animals or birds lived. There hunters began to make various loud sounds forcing a game to run directly in hands to other hunters.

By the third way to catch a game it was connected with use of hunting dogs. When hunters saw animal traces on the earth, they immediately sent on it dogs. In a case when the game did not manage to leave still far, borzois could catch up and catch production in the shortest possible time. The borzoi could follow very long in the tracks therefore the game practically had no chances to escape.

The firearms were under the most strict ban

Kazakhs, being faithful supporters of traditions of ancestors, always used exclusively national means of hunting. In practice it meant that under no circumstances the Kazakh could not use firearms. Today ethnographers tradition not to use firearms ancestors explain not so much with humanity reasons, how many self-interest.

The cost of the got game in many respects was determined by quality of a carcass. Nobody would buy a game which carried on small parts from a shot. For this reason hunters preferred the ways of murder which are least injuring for a body of an animal or a bird. For example, the carcass of the killed eagle cost nearly ten camels.

If the hunting campaign passed successfully, then all its participants took seat then more conveniently around a fire. The magnificent table symbolizing prosperity and gratitude to God for the sent good luck during hunting was laid. Music and various stories about feats of hunters sounded. Then celebrations ceased and the solemn speeches glorifying trainers of golden eagles, fleet dogs and so on began to be delivered.

Traditions continue to live and today

Can seem to much that many of these traditions became an archaic remnant for a long time. Contrary to general opinion, Kazakhs continue to make thrifty use of traditions of the ancestors. Every time, going to hunting, Kazakhs try to observe not only a letter, but also spirit of traditions of the grandfathers and great-grandfathers. There is a belief that the one who will dare to break ancient customs will make angry heaven. A grief to that person for whom years of misfortunes wait